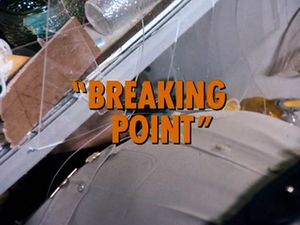 Ponch loses his confidence after a crash in which he is injured by shards of glass. Ponch's sister is visiting too!

Jon and Ponch are talking about Ponch's sister visiting when they spot a speeding car and chase after it. Swerving to avoid an accident, Ponch crashes through the front door of a store. He lands with his head inside a display case and shards of glass pointing at his neck. Grossman, Baricza, and Turner arrive and help Jon lift the display case off of Ponch.

When the return to Central, Harlan, Getraer, and other officers are there to greet Ponch. Ponch gets a new motor and heads back out to the streets with Jon to finish his shift.

While going by the airport near the Pacific Coast Highway, Jon and Ponch respond to a call for 2-11 suspects in a Camaro. When they spot the Camaro, it causes two cars to roll over. Jon takes the accident while Ponch goes after the Camaro. As he is in pursuit, he gets nervous and pulls over. He blames his motorcycle while Turner and Bonnie respond that they are taking over the pursuit.

That night, Ponch brings his sister back to his "pad". They both duck questions about their jobs and Patti turns in early.

The next morning, Harlan posts a computer printout of items in his garage sale including a "trombone, slightly used". As they're about to head out, Ponch tells Jon that he has to do paperwork for a court case that was moved up. Inside, he runs things by Getraer even though it's standard procedure. Eventually, Ponch runs out of paperwork to do. As Jon arrives back at Central, Ponch hitches a ride with Bonnie. He says he can't take his motor because he's meeting his sister at a restaurant and wants to change on the way. Bonnie refuses to let him change in her backseat.

That evening, Ponch and Patti dance and talk about the good time they're having. Patti tells Ponch that she doesn't want to go back to nursing and wants to become a model. Ponch refuses to tell their mother, but agrees to stand behind her.

The next day, Ponch is cleaning weapons in the briefing room. He tells Jon that he had traded weapons duty with Baricza yesterday, but has to do it today because the reports took all day yesterday. Harlan tells Ponch that he tuned his motorcycle to perfection. Ponch tries it out in the parking lot and starts showing off in front of his fellow officers with various stunts. Getraer tells him to keep his seat on the seat and try it out on the road.

On a nearby street, Bonnie spots a yellow car driving wrecklessly on Broadway. Ponch and Baricza also respond. While in pursuit, Ponch gets nervous again and pulls over. While stopped, he spots a motorcycle doing wheelies and chases after it. It turns a corner and slides under the trailer of a truck. Ponch follows it, but falls over when trying to avoid the trailer. At the hospital, Ponch is hooked up to machines and we hear Getraer. "Frank. Frank."

We're back at the street corner where Ponch stopped and realize that the motorcycle chase was a dream. Getraer is next to Ponch now. Ponch blames vibrations again. Meanwhile, at the corner of Benton and Hill, the yellow car flips over and causes a major accident that sends two cars airborne at the same time. Turner, Bonnie, and other units arrive right after it happens.

At Central, Grossman has brought a bunch of personal items in and is putting them in a closet. He says he doesn't have time to deal with junk and goes to talk to Getraer about getting more in service training. Getraer tells Ponch to take some time off instead while his sister is in town and not psych himself out. Ponch walks out and everyone just stares at him and says nothing.

At his apartment, he shines his boots, goes jogging, and washes his car. Even though Patti made one of his favorite dishes, he says he's not hungry. Jon shows up and offers to take Ponch for a ride. He talks about how his sister's doing a complete 180 with her career, but soon changes the topic to why riding a motor is so special. When they get back to Ponch's apartment, he sees that Jon brought Ponch's motor back in case he "got the urge."

The next day, Ponch and Patti meet Jon and his girlfriend Christie at the tennis courts. Patti is excited about being able to talk to Christie about being a model. On a nearby tennis court, a man has a heart attack. Patti realizes that the man is suffering from heat stroke and tells everyone how to help. They stabilize the man by the time paramedics arrive.

Back at Ponch's apartment, Patti is confused. She tells her brother that she's scared. Ponch tells her that they're both needed to save lives. Inspired by her sister and wanting to live up to his own words, Ponch puts on a dark uniform, goes downstairs and gets on his motorcycle again. He almost psychs himself out, but gives it another go. Driving along the Pacific Coast Highway, he gets his confidence back. A call comes in for a stolen Yamaha motorcycle and he responds. Even though it's four miles away, he says he'll be there in two minutes. When Getraer questions it, he says he'll be there in one and a half.

"Proceeding to intercept stolen Yamaha. I'm two away."
"That's four miles!"
"Make it one and a half!"
-Ponch and Getraer