Time Flies When You're Alive

Paul Linke (Officer Arthur Grossman) was born in 1948. In 1978, he married Francesca Drapier. They had three children together. In 1986, Francesca died of cancer. This prompted Paul to create a one-man play on HBO dealing with his work on "CHiPs" and his wife's bout with cancer. Details are available in his book, Time Flies When You're Alive: A Real-Life Love Story.

In 1991, he married his current wife, actress Christine Healy. They had one child together.

Paul Linke has appeared as a pawn shop owner in an episode of Hunter. He was also sighted, but not properly accredited, as a sheriff in the Wynona Ryder movie Welcome Home Roxy Carmichael. During his Happy Days appearance, his character wanted to beat up Ralph because of gambling debts...but Fonzie came to Ralph's rescue.

Paul has also been on an episode of Beverly Hills 90210. It was in the first summer when Brandon was working at the beach club. He was playing tennis against some old guy that was cheating on his wife. 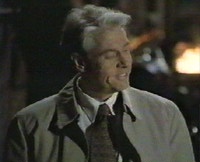 Paul Linke appearing on Lois and Clark in 1996