Return of the Supercycle

Ponch ends up in hospital when he crashes while pursuing a jewelry thief on a motorbike. Jon and Ponch think it could be Roy Yarnell, who's back in town with his own stunt show. Meanwhile, a new female officer is interested in Jon, but his colleagues think she's there to spy on them.

A red motorcycle robs a jewelery store and is immediately chased by Ponch, Jon, and Baricza. Swerving to avoid a trailer, Ponch gets knocked unconsious and ends up in the hospital (again).

After watching a clip from last year's episode, Kathy Mulligan (a visiting CHP) hits on Jon...but his mind's on the supercycle. After the briefing, he heads out to see Roy Yarnell and uncovers nothing. The red bandit hits again after the commercial. Jon, Baricza, and Mulligan chase him. He escapes over a jump ramp. Since Jon's motor needs repairs, he wants to use the supercycle but Getraer refuses.

Back on the streets, Getraer and Jon chase the red bandit into the L.A. Colosseum. He drives up the steps to the top and escapes. Upset, Joe lets Jon use the supercycle. While Jon visits Roy, we learn that it's really the mechanic who's been pulling off the robberies. Bonnie realizes that they're really plotting to steal a diamond to frame Roy. The CHP arrives just in time to scare off the red bandit. Jon chases him down and catches him thanks to the supercycke, After Kathy says her goodbyes, Jon visits Ponch.

Ponch shows a film of Jon on a dirtbike with a hang-glider attached. Jon jumps a truck on it. Then Getraer pops out to take credit for filming it. It turns out that everyone's there laughing at Jon's stunt. 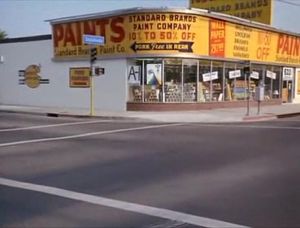