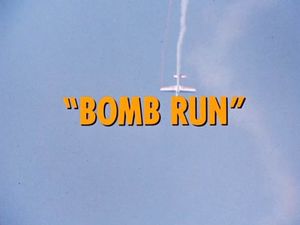 CHP is setting up a recruitment stand at an airshow when an old girlfriend of Baricza's drops in with her father in a vintage plane. Baricza senses something is not quite right, but doesn't realize they plan to use their aerial show as a cover for a robbery.

After Ponch gets flying lessons from Jon, the rest of the CHP prepares for an air show. Baricza meets up with old friends of his while Grossie and Turner keep complimenting each other on their CHP booth. Later, everyone finds Baricza's friends suspicious and investigate them. Although there's no evidence to support their suspicions, they stay alert. While one crook drops bombs in an airshow simulation, other crooks bomb open the airport safe. Baricza realizes an explosion's not an echo and runs toward it with Bonnie. When the crooks try to run, they see their car being removed from an illegal spot. They steal a car and Baricza and Bonnie are after them. Jon and Ponch take to the air and chase the crooks. When the pilot crook falls unconsious, Ponch climbs down a rope ladder into the crooks' plane and takes control. After bouncing, he lands the plane safely.