The Game of War 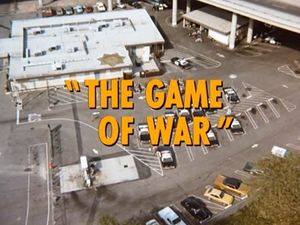 Ponch and Jon have to deal with a bunch of soldiers whose war games get out of hand.

Two teams are playing some sort of army game and firing colored water balloons at each other. It gets out of hand and they leave the field and take it to the streets. They end up causing a major accident and drive off. That night, a former military guy demonstrates his jet pack on the roof of an L.A. building.

The next day, a woman fakes car trouble to serve a construction worker with a summons. That night, the CHP holds a chess tournament.

The next day, Ponch and Jon go to the local military store when they hear about their game. They deny using colored water balloons and tank insignias.

Later, the military rocketeer's van is pulled over by Bonnie for speeding. While he jets out the top, his driver speeds off in the van.

Later, an old woman intentionally gets hit by a limo. When she gets up, she serves the passenger. Upset, the limo drives off while her coat is stuck in the door. Ponch and Jon come to her rescue, find out it's Darla, and take her to lunch.

Back at HQ, Harlan beats Grossie after their all-night chess game...because Grossie knocks over the chess board as he's about to make the winning move.

When attempting to serve Ron Bates with a summons, Darla is caught listening to plans to free Rascoe. As the prisoner transfer is in progress, the military guys create a smoke screen around Turner's cruiser and take Rascoe.

Meanwhile, Ponch and Jon notice smoke coming from a van and find the Darla inside. While being chased, Rascoe escapes the van in a jet pack and lands in the head military guy's car. Ponch and Jon show up to arrest them both.

Back at HQ, Darla ends up being served by the limo owner, claiming she scratched her limo.