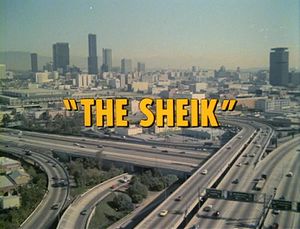 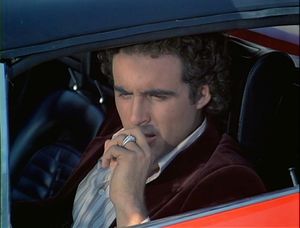 Barney is pulled over. 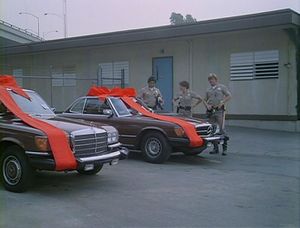 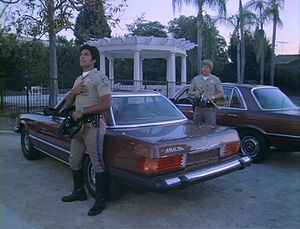 Ponch and Jon return the cars.

After Jon loses his cool, Jon bets Ponch can't keep his. Ponch agrees to give Jon a quarter every time he does. Ponch and Jon pull over a speeder who gives Ponch a sore chin and claims that he has diplomatic immunity. Out on the highway, Ponch and Jon find an accident caused by spilled nails in the road. After hanging around, they chase the speeding sheik again. When they check his registration, they find it expired a year ago and impound the car. When the sheik invites them to a party, Ponch and Jon show off their jet-skiing ability. On deck of the boat, Ponch enjoys caviar and cold beer while Jon speaks "lousy French" to some "foxy ladies". The sheik then tries to bribe Ponch and Jon. They're about to leave when they see a boating accident and chase after the runaway boat with jet-skis. Jon saves the unconsious captain while Ponch steers the boat away from the sheik's yacht. After jumping overboard, the boat explodes. Later, Ponch shows off his new apartment (without any furniture) to the sheik's cousin. The next day, Ponch and Jon take sheik Barney out in a cruiser to a junk yard where they show him wrecked cars. Later, they arrive at an accident scene where Ponch has Barney hold an I.V.. After the briefing, Ponch and Jon find that the sheik was giving them each a new Mercedes. They give them back and take a handshake. Later, Ponch and Jon pull over Barney's Ferarri again...with his cousin at the wheel. She was speeding all over their beat to find them...and got tickets from the whole CHP. She had to leave the country and wanted to say goodbye.