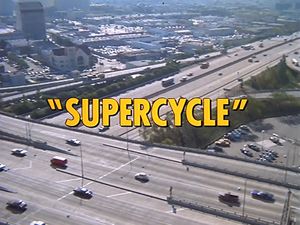 Jon and Ponch pursue the phantom, a daredevil artist who endangers bystanders. A stunt rider performs illegal stunts on the California freeway and then speeds away. Harlan builds a motorcycle that can match the performance of the stunt rider's bike. Ponch chases the suspect on the CHP cycle, jumps a moving ramp on the freeway, and catches the suspect.

After lunch, Ponch tells Jon how he likes to go to different places for lunch when they spot someone performing stunts on a motorcycle. While they pursue the stunt rider, two men in a pick-up truck film the chase. Ponch and Jon follow the rider through an abandoned lot. The rider rides up a ramp and jumps over a wall. Ponch and Jon scramble up the wall only to see the rider wave to them from the other side before he rides off.

At Central the next day, Getraer is shows Ponch and Jon a film of their chase of "the phantom." Getraer says it aired on KPR TV the previous night and asks them to drop off the film after having Harlan check out their motors. In the hallway, Baricza and Grossie give Jon and Ponch a hard time about their TV performance.

Out in the garage, Jon and Ponch ask Harlan about the rumor of an experimental "supercycle" the department has purchased. Harlan admits that the state has bought some, but won't let them have one. When Dave, Harlan's dog, runs off, he pulls the cover off of a supercycle sitting in Harlan's garage. Harlan had been working on it at the test track but wasn't supposed to have it in his garage. Ponch convinces him to let them use it when it's ready in exchange for not telling Getraer that the secret's out on the supercycle.

Jon and Ponch visit the Piermont Ad Agency about the phantom commercial. They ask the secretary, Sheila, where to find the phantom, but get nowhere. They inform Sheila of the danger associated with the stunt. After they leave, Mr. Gesslin and the phantom (aka "Roy") come out of the next room and congratulate Sheila on her job of covering for them.

At the test track, Ponch gives the supercycle a try and says it's working great up to 55. Harlan wants to take it up to 60 and try the supercharger. Jon flips a coin and wins, so he gets to try it. As the supercharger kicks in, the supercycle begins to wobble and Jon falls into the infield of the track. He's fine, but Harlan will need to fix the front wheel and fork.

At Central, Getraer assigns Sindy to investigate the phantom. Although she investigates, he wants Jon and Ponch to be the ones to "nail him." When they come in, Getraer tells them to bring parts requisition to Harlan at the test track.

Meanwhile, Roy expresses his concerns to Mr. Gesslin about doing a running jump on the freeway. He assures him that everything will be okay and that he should get out and be seen. While Roy changes, Gesslin reveals he doesn't care about Roy on a personal level as long as he gets the job done.

Later, at the test track, Sheila and Roy show up. We learn that Roy is from Alabama, "Just messin' around. Trying to get myself located." They ask Sheila if they can have permission to use the supercycle against her client. They tell Sheila and Roy that he's endangering lives and they want him off the street now. Ponch gives the supercycle, which is now painted in CHP colors, another test run. While Ponch tests the supercycle, Jon asks Sheila if she knows anyone who owns a two-tone brown pickup, which almost ran him over. Ponch tries a few jumps on the supercycle and everything seems to be good.

Back at the ad agency, Sheila's upset that they did the wall of fire. Gesslin insists that it's essential to get Roy seen, but Sheila doesn't want to get the agency in trouble. We learn that she inherited the agency after the previous owner, Bud Piermont, passed away and couldn't pay her salary. Gesslin suggests that they change the promotion.

At Central, they review the film again and Jon tells Getraer that they know about the supercycle. Getraer isn't in favor of having Ponch ride the supercycle, but isn't clear about his feelings.

Elsewhere, Roy tells Gesslin that he doesn't want to see anyone get hurt and walks off. Gesslin gives Roy an ultimatum.

At Central, Ponch and Jon head out on patrol with Ponch riding the supercycle. As they leave, we learn that Getraer and Harlan had planned to have Ponch ride the supercycle and have Jon supervise all along without actually ordering them to do so.

On the streets, Roy speeds past Ponch and Jon. Ponch, on the supercycle, takes the lead and follows close behind. Jon abandons the chase when the motorcycle chase causes an accident. Roy turns off the road and heads into the old Griffith Park Zoo. When the supercycle is damaged by some rocks, Roy escapes.

That night at Central, Jon makes a call to look up the registration on the van with Alabama plates that caused the accident as well as any vehicles registered to the Piermont Advertising Agency. Harlan tells Ponch that he cracked the frame, but it will be ready by morning. In the hall, Sindy tells Jon and Ponch that she hasn't found any facility doing a motorcycle show, but she's going to check airfields. Getraer tells Jon and Ponch that the truck is registered to Sheila.

The next morning, Jon and Ponch go to Piermont and arrest Sheila, who clearly regrets her actions. Sheila confesses and admits that Roy Yarnell is the phantom. Jon gets a call from Sindy who tells him that the jump will be at Turner Air Park, but Sheila tells them it was moved to Ventura Frontage Road near Tully Avenue.

At that location, they spot the phantom and chase him. Getraer and Sindy join in the chase as well. Roy jumps over a moving car and Ponch takes the jump too. A truck swerves to avoid the camera van and spills his load. Roy hits the load and falls. Jon arrests the men in the van and Ponch tells Roy they'll take him to the hospital. When Getraer arrives, he yells at Ponch for taking the jump and gives him a censurable incident report and four days off without pay.

At Central, Sheila thanks Ponch for getting the charges against her dropped, but Gesslin went to jail. Roy, now on crutches, has his charges dropped as well. The supercycle will be sent out to the Mojave Desert for further testing. As Sheila and Roy leave, Ponch confesses to Jon that he has a date with Sheila tomorrow night. Jon tells him not to feel bad if she cancels because she has a date with him tonight.

"I never really watched you crash before. You do it very well!"
-Ponch