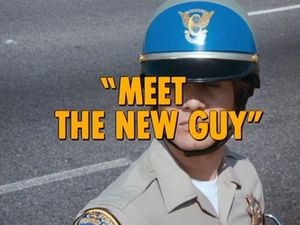 Ponch becomes the training officer of a new rookie, Bobby Nelson, as they try to catch a pair of health-club thieves and find a runaway teenage mother who has stolen back the baby she sold. Tommy Lasorda, Richard Simmons, and Keenan Ivory Wayans guest star.

Ponch (now a training officer known as "Mary 6") is out cruising westbound on the Santa Monica Freeway as "The Lone Ranger" when Getraer radios him and tells him that his new partner is coming to meet him. Ponch is upset and reminds Getraer that he said he'd never get another probationer. As he does, Ponch's new partner, Bobby Nelson rides up.

Within minutes, Bobby spots trouble. A woman is distracted by her baby and accidentally rams another car. The car she hit takes off speeding and Bobby goes after them against Ponch's wishes. While Bobby chases the speeder, the car with the baby swerves and the baby slides out the door onto the road. As cars drive by it and swerve to avoid it, Ponch rides by and saves the baby. Behind him, cars launch into the air in a spectacular accident. Kathy Linahan arrives and calls in the resulting accident on the San Diego Freeway, north of Nashville. Unfortunately, Bobby lost the speeder. Ponch isn't happy with Bobby for chasing the speeder alone.

Soon, they notice that there's nobody in one of the cars, neither Grossman nor Ben saw the driver, and nobody claims the baby. After dropping the baby off at Valley General Hospital, Bobby pulls a wheelie on his motor. Poncherello scolds him before he and "Hot Dog" go back to Central.

At Central, Ponch makes Bobby fill out the report because his old partner used to enjoy it. After Ponch introduces Bobby to some girls, Getraer puts up a postcard on the bulletin from Jon. He says he's thinking of them while he's working his father's ranch in Wyoming. As Bobby leaves to fill out reports, Getraer asks how he's doing. Ponch says he's "hungry for action, but going to be great." Getraer asks if it reminds him of anyone from about five years ago. "Yeah, I told you he was going to turn out great!"

At the hospital, the baby's mother looks in on her baby and tells her friend that she's going to get him back.

Out in Harlan's garage, Bobby takes off by peeling out. Ponch and Bobby head over to see the owners of the car Bobby had been chasing earlier. They claim they didn't even know it was gone and that they don't know who the baby belongs to. Ponch is suspicious.

The next morning, Richard Simmons is leading a workout that Ponch is attending. Richard gives Ponch special attention, but knows that Ponch is really there for the women. It isn't long before some thieves rush in and make Richard give them everyone's belongings. Ponch runs out after them as Richard faints. Ponch gets on his motorcycle without his shirt and chases after them. An LAPD patrol car chases the half-naked Ponch. When the thieves are cornered, they make a run for it. When Ponch tries to chase them, LAPD cuffs him. They don't believe he's a CHP officer. Luckily for Ponch, Bobby arrives and identifies him4.

At the briefing, there's a picture of Ponch on Getraer's podium that reads "WANTED - Impersonating an Officer". When Ponch walks in, he gets quite a ribbing from his fellow officers. After the briefing, Sarge tells Ponch and Bobby the identity of the unknown woman from the accident, Amy Kent.

Meanwhile, the Amy Kent disguises herself as a nurse and steals the baby. A call comes in that there was a kidnapping at the hospital and Ponch and Bobby respond. They're greeted by reporters and Ponch goes on live TV urging people to turn in Amy Kent by calling the CHP at 555-7374. Amy sees it on TV.

Later that day, Ponch and Bobby spot a speeder and pull him over. It turns out to be Tommy Lasorda of the LA Dodgers. He says he's late for the World Series. Bobby gives him a hard time but Ponch eventually identifies him and they let him go.

They respond to a call telling them where to find the thieves who terrorized Richard Simmons. The thieves split up on foot and Ponch and Bobby split up to go get them. Bobby almost runs over the thief he's after. When the other one falls in a pool, Ponch arrests him.

Back at Central, Getraer says he got a call from the Commissioner congratulating him on his health club bandit bust. He says he gave them some credit too. Bobby bitches at Ponch that he's not Jon and wants to be treated differently.

Kathy looks up data for the baby on a computer. They learn that the baby belongs to the couple who claimed not to know their car was missing. When Ponch and Bobby confront the couple, they eventually confess and we learn that they bought the baby from Amy for the $2000 that was in the car then she stole the baby back. They tell Ponch and Bobby that Amy talked about a "utopia" in Oregon.

While Ponch and Bobby are out looking for Amy, she hitches a ride with a person drinking beer. Amy's friend tells Ponch and Bobby what car she got into. Down the road, they spot the car and chase it. It swerves to avoid construction equipment and jumps off a hill into quicksand. Ponch and Bobby get a ride in a backhoe and rescue Amy and the baby. Ponch tells Bobby he did a good job and they both celebrate by doing wheelies.