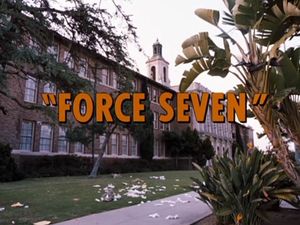 We are introduced to a secret LAPD unit dedicated to the preservation of human life through the use of martial arts.

Ponch and Jon spot a speeding drunk and pull him over under an overpass. Jon finds confidential military secrets which fall out of the car.

Later, a young officer named Rick Nichols (who looks remarkably like next season's Bobby Nelson) reports to Lt. John LeGarre for assignment with a martial arts group named "Force Seven". Shortly, the Force Seven group gets an assignment to recover a stolen missile.

Before we know it, the Force Seven team is sneaking into a warehouse looking for clues. When Rick makes some noise, they're discovered and have to escape. That night, they try again ... and are discovered again. They fight the employees and win. After the victory, an old friend of LeGarre, named Nakura, appears and captures them. After the Force Seven members escape, Nakura sets his plan into action and arms his stolen missile.

Nakura sends a taped message to the mayor and threatens to use the missile unless his demands are met. By examining the stars in the background of the videotape, Force Seven figures out where Nakura is hiding his missile.

The next morning, the Force Seven team sneaks into Nakura's compound using some pretty nifty martial arts skills. With 15 seconds to spare, they get Nakura to tell them the abort code of 666.

After the commercial, Nakura realizes that the warhead's armed to go off in one minute. Rick uses his magic Super-Poly-Grip powers to disarm the warhead just before it detonates.

Later, at CHP Central, Getraer meets Ponch and Jon in the hallway and congratulates them for discovering the confidential papers which led the police to "the crazy" with the missile.