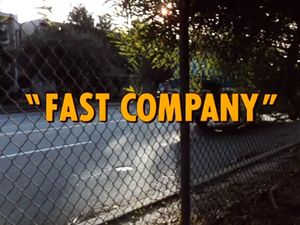 Ponch gets newly qualified Officer Bruce Nelson as his new partner, and they both head south looking for a guy involved in auto theft. They spot a couple of murder witnesses, but the local sheriff wants them too. He impounds Ponch and Bruce's bikes and attacks them all with tear gas. Back at Central, Getraer gets to babysit the captain's grandson.

Officer Nelson ... Officer Bruce Nelson ... and Ponch are out and spot a stolen car within Bruce's first hour as an officer. When they try to chase it, it ends up in an accident.

At the briefing, we learn that that Bobby Nelson is now Kathy's partner. After the briefing, Bobby gives Bruce his lucky horseshoe keychain.

Ponch and Bruce go 75 miles south to Lone Canyon to follow up on the auto theft.

Meanwhile, Captain Burke drops his grandson off at Central for Getraer to babysit.

At 11:30am, Ponch and Bruce find out their suspect died a few days ago. While getting ready to leave, they notice the "Zodiac Twins", witnesses to a drug-related murder. While in the diner/general store, the local sheriff claims he has a warrant for the twins. When he doesn't get them, he impounds Ponch and Bruce's motors.

When Bobby and Kathy find nothing in Juniper, they head for Lone Canyon.

Meanwhile, Sheriff Bolt shoots tear gas into the general store. Ponch and Bruce escape in an old truck. The sheriff and his posse chase the truck ... but wait! Ponch is just carrying manequins! Bruce and the twins free the CHP motors while Ponch leads the sheriff away. Ponch gets on Bruce's motor while a Jeep rams the truck and then it explodes.

Bruce and Ponch head back to pick up the twins and leave Lone Canyon. Bruce wants to stop when he sees a construction crew, but Ponch knows it's a trap. They start driving cross-country to get away from their guns. While Bruce fixes his broken chain, Bobby and Kathy enter Lone Canyon.

Meanwhile, Harlan pawns off the Captain's little brat off on Grossie.

Back in Lone Canyon, Ponch discovers that the sheriff is in on the drug dealing (Duh! Why else would he be after the girls?) Bruce finally fixes his chain by using the lucky horseshoe keychain.

Meanwhile, Grossie turned little Billy over to Webster. Sarge finds Webster tied up in his locker.