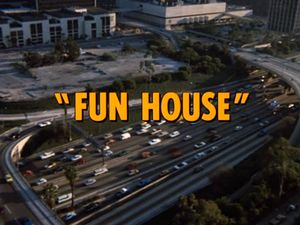 Some college kids putting up a banner cause a multi-vehicle crash. It turns out they're from Getraer's old fraternity, Delta Delta Tau. Bruce is working as a crossing guard and meets a young girl who gets kidnapped by a woman who lost her own daughter.

As the episode begins, Ponch and Bobby spot some college girls on the sidewalk and Bobby admits he loves patrolling near a college campus.

Meanwhile, some college kids are hanging a banner off a bridge when they cause a major car accident and fall into manure. Ponch and Bobby arrive and send them to Central with Webster.

Meanwhile, Bruce is doing the job of a crossing guard. He flirts with an 8-year-old girl who is being stalked by a mysterious woman.

Back at Central, Getraer smells something. He thinks it's Grossman at first, but quickly realizes that it's the college kids. He finds out that they're members of Delta Delta Tau, his old college fraternity and agrees to look into the campus thefts which they're being blamed for.

Across town, Bruce gets a picture from the girl. As the girl walks home, the mysterious woman convinces the girl, Lindsey, to ride with her.

A few blocks away, Ponch and Bobby pull over the DDT frat boys in a pathetic van. They pull it over and find three stolen electric typewriters in the back. Back at Central, they insist they knew nothing about the typewriters.

In Getraer's office, Bruce talks to Lindsey's mom and tries to figure out where she is. Bruce recalls seeing a sad woman who may know where Lindsey is and agrees to have a composite drawing created.

That afternoon, Lindsey is at Hildy's home and is told her mother had car trouble and she will be spending the night in San Diego.

Later, Ponch and Bobby are searching DDT's house and start to believe they really were set up.

Bruce and Kathy go out to the local toy shop, Cartoon Junction, looking for the woman Bruce saw near Lindsey's school. They manage to get a name.

At the college, members of a rival frat steal some lab equipment and take a virus canister thinking that it's worth something.

Ponch and Bruce spot a van near the lab and decide to chase it. The van hits a car and starts a fire. Ponch gets the woman out of the car seconds before it explodes...in typical "CHiPs" fashion.

Later, Ponch and Bruce are searching the rented house of the kidnapper. They find a doctor's appointment card.

Back at Central, they talk with her doctor, Dr. Joyce Brothers, and find out that she lost a child and kidnapped Lindsey as a replacement. Ponch realizes they might be headed for Mexico and arranges for a helicopter to goes after her.

At the briefing, Getraer updates people on Lindsey. He then yields the podium to Grossman who dramatically lets people know how to identify the stolen virus canister.

At the DDT frat house, Alpha Kappa Gamma plants the stolen goods and gets out unnoticed. A couple DDT's happen to find the canister and use it to open beer.

While Bruce and Ponch check cars headed to Mexico with the help of the Mexican authorities, Getraer, Bobby, Grossie, and Kathy search the DDT house for the virus canister. Kathy notices a photo of Getraer pouring a bottle of ketchup over his head.

On the road, Lindsey realizes they've passed San Diego and are headed to Mexico. As they approach a road block, Lindsey runs to Bruce and gives him a big hug while Hildy runs to a cliff. He manages to convince her not to jump to her death.

Back on campus, the DDT's are playing tug-of-war. Ponch, Bobby, and Bruce search for the virus canister. When one of the guilty brothers from another frat admits he stole it, they arrest them and go look for the canister. Ponch grabs it just before it would be smashed open by a hammer.

Back at Central, the DDT's give Getraer their winning check for $5000 as a donation to the CHP charity, the Children's Liver Foundation.

"Five violations! We weren't even driving!"
"I thought this was America!"
-Delta Delta Tau frat boys

"You were still in short pants during Vietnam!"
-Getraer to the frat boys