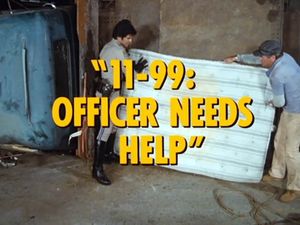 Some van thieves end up with some dangerous chemicals that were loaded by mistake. Jon and Ponch have trouble understanding a new dispatcher. Grossman accidentally causes an "Officer Needs Help" alert while trying out a new safety device.

Out on a harbor loading dock, Jerry, a dockworker, sets up a loaded van to be stolen by two of his friends waiting nearby in a car. Jon and Ponch hear the call with the description of the van and accompanying car come out over the radio, given by a speech-challenged dispatcher. The van and car pass by, and Jon and Ponch pursue. The crooks hang a sharp left turn, throwing Jon and Ponch off course and causing an accident with a mattress truck.

As they help the driver clean up the mattresses, Jon calls it in to dispatch, where Getraer, Bonnie, Grossman and some other officers are learning about a new communications device outside of the Communications Center. The dispatcher, Kathie, continues to have a hard time working dispatch. Her coworker, Pam, steps in and relieves her. At an abandoned warehouse, the crooks are hiding the van they stole, supposedly containing $10,000 worth of stereos. One box contains something with a horrible stench. They remove both boxes.

Back at the loading dock, a driver calls in to the supervisor, Rod Sullivan, saying that he's missing two boxes containing a volatile chemical. When leaving his stop, the driver is forced to slam on his brakes when a girl on skates is nearly hit, causing one of the boxes of chemicals to fall over. The chemical begins to react. At the dock, Sullivan fires Jerry from the dock for loading the two boxes of chemicals into the wrong van (the van that his friends stole).

Kathie stutters the update about the dangerous chemical over the radio, while the CHPs try to catch up to the van on its route. The fumes in the van worsen, and the driver begins to lose control of the van. The CHPs catch up to him. Ponch gets him out of the van just before it explodes. During cleanup, Jon is asked to go to Sullivan's home for further information about the chemicals.

At Sullivan's home, Jon calls in the information he receives about the chemicals – it reacts when in contact with aluminum, and the floors in the vans are made of aluminum. He also finds out that Sullivan was fired because his boss thinks he was involved with the van being stolen. Back at the warehouse, Jerry arrives. Unlike his friends' car, there isn't an APB out on his car, and since he's not suspected of stealing the van, he convinces his friends to use his car for future hits.

At the dispatch center, Ponch comes in to obtain recordings of dispatched calls for his reports. He also meets Kathie for the first time. Out on the street, Grossie stops another van fitting the description of the one that was stolen. He uses the communication device demonstrated earlier to record his location. After releasing the van, Grossie sees a dog on the street stopping traffic, and coaxes him onto the shoulder. He falls when playing with him, activating the device. The help call comes into dispatch, and Kathie falls apart trying to handle the call. Every unit in the area responds leaving Grossie dumbfounded.

That night, Ponch and Jon have a double date with Pam and Kathie. Ponch and Kathie are getting on well, until Kathie suddenly wants to leave. As Ponch walks her to her place, Kathie reveals that she's still hurting from a past dispatch call that got her high school sweetheart killed, hence the challenges speaking when dispatching calls.

On the way home after the date, Jon and Ponch see Sullivan's son, Chad, collecting cans to supplement the family income, resulting from Sullivan's losing his job. The next day, Jon and Ponch decide to keep an eye on Jerry for a possible lead on the van theft. Jon follows him, while Ponch closes in from the other side of the vicinity. Jon loses him at first, but later finds the warehouse. The crooks hear him outside, and crash through the door escaping in their vehicles. As Jon is on the ground, it activates the communication device.

Backup arrives to help Jon. Blocks away, Chad sees the van and phones the police. Jon and Ponch go after Jerry in the van towards the harbor; Chad chases the van as well. Jerry's driving causes a box of chemicals to turn over and it reacts with the aluminum floor, unbeknownst to Jerry. He jumps out, and Chad chases him. Ponch and Jon spot Chad's bike and stop to check it out, with Baricza backing them up.

Chad is injured while chasing Jerry, and the CHPs hear his yells and go in that direction on foot. Jerry runs aboard an abandoned freighter. The CHPs go aboard looking for him. As they run around aboard the ship, Baricza gets himself locked into the engine room. Jerry leaves the ship and takes off in the van; Jon hops on as it passes by. The fumes are still building in the back, and Jon gets Jerry out just before it explodes. Getraer shows up to make the arrest and they all realize that Baricza hadn't come out of the ship. Ponch and Jon run back in and find him.

Later out on the street, Jon and Ponch hear a pleasant, confident sounding voice over the radio. They pull into the dispatch center, and to Jon's surprise, it was Kathie. Both she and Pam meet them outside. The episode ends with freeze frames of laughter, after Ponch implies that his advice to Kathie to imagine talking to a dashing, charming man (himself) is what helped Kathie get past her issues on dispatch. 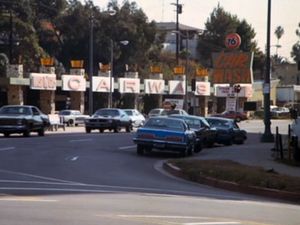