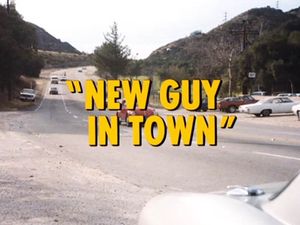 A man blames Jon and Ponch for the death of his brother during a pursuit, so, with the help of his sister-in-law, he tries to kill them. A rookie officer seems too perfect, and the team bet on when he'll make his first mistake.

The episode opens with Jon training a new motor officer, Theodore Carlton "T.C." Hunsacker. Not even 10 seconds after breaking the ice, T.C. spots a speeder approaching from the rear, and they pursue to stop them. Eating lunch at a local eatery, Grossie and Turner argue over T.C.'s immaculate record, and the fact that he does not seem to make mistakes. Turner insists that T.C. will make a mistake eventually; Grossie turns it into a pool, as Ponch listens. Back out on the street, Jon and T.C. are wrapping up giving a ticket to the speeder, when a van comes barreling out of nowhere, and crashes into Jon's motor, in turn hitting Jon. Injured, Jon tells T.C. to chase the speeder, and collapses as he calls it in as the theme starts.

T.C. pursues the suspect that hit Jon. They wind through residential streets, until a station wagon pulls out in front of T.C. and cuts him off. The van gets away. Back at the accident scene, T.C. returns and is chewed out by Ponch. Ponch feels like T.C. should have stayed with Jon, but doesn't understand that Jon sent him after the van.

Back in the residential area, the station wagon that cut T.C. off pulls into the driveway of a home where the van is parked. In conversation, we learn that the driver of the van is Martin Beck, the identical twin brother of a man that was killed while being pursued by Jon and Ponch years prior. The driver of the station wagon was his wife, Lina. Martin, an explosives expert, plans to avenge the death of his brother by killing Jon and Ponch.

Back at Central, Grossie tries to conquer a Rubik's cube while Bonnie watches. T.C. walks in and solves it in seconds. Ponch comes in, and apologizes to T.C. for being hard on him about leaving Jon; Jon did tell him at the hospital that he sent T.C. after the van. It turns out that Jon will be okay, he only had a slight concussion and sprained shoulder. He also reveals that he was a part of the pool, and lost. T.C. is surprised that there's a pool on him, but joins in. Bonnie invites him to a "welcome to the crew" barbecue at her home. T.C. mentions having to be late, due to recording a symphony on T.V. that he just cannot miss.

Ponch visits Jon at the hospital. Later that night, Martin is placing a bomb inside Ponch's Firebird as people arrive for Bonnie's "barbecue" (which actually seems more like a standard party). T.C. arrives at the party, and manages to snag Ponch's date with his talk about the symphony he recorded before arriving. After the party, T.C. follows Ponch to his car to apologize about his extended conversation with his date. As T.C. begins to walk away, he sees wires on the ground that Martin threw out the window earlier while installing the bomb. They lift the hood of the car and see the bomb.

The next day at Central, Ponch is showing Getraer the bomb. They begin a brainstorm on who could be after him and Jon. Ponch then voices his irritation with T.C. being a perfectionist. Getraer concedes, but asks that T.C. be treated like anyone else that would make a mistake. Out on patrol, T.C. and Ponch converse briefly, until a van driving erratically nearly hits them from behind. It runs off the road and rolls down an embankment. Ponch is furious, thinking it's the guy that hit Jon. T.C. pleads with Ponch to control himself; he spotted the van as it approached, and was sure it was a deuce. Ponch lets T.C. handle the arrest so he can gather himself. Later, T.C. offers to buy Ponch lunch, and chooses the restaurant – a Mexican joint. They talk, and then play chicken with chili peppers.

Back at Central, Ponch visits Jon in the file room. Jon shows Ponch a file that he dug up on Robert Beck, and realizes that he has a twin brother that could be a possible suspect that's trying to kill them. Out on the street, T.C. and Ponch are patrolling until Lina Beck speeds past them, luring them to an open field where an abandoned car is parked. She leaves after being ticketed. As they approach the abandoned car, T.C. then remembers that she was the same woman that cut him off while chasing the van that hit Jon. They back away from the car, suspecting it's wired. Ponch throws stones at the car until he triggers the explosion. Later that night, Ponch and Jon go bowling with the gang. Lina and Martin Beck are waiting to take them out in the parking lot, but other pedestrians are in the way. They decide to wait until they're leaving. Inside, T.C. works his magic on Grossie's bowling and helps him bowl a strike. With everyone continuing to be amazed at his ability to be good at everything, T.C. admits that despite his perfectionism, he's never been good at making friends.

As Ponch and Jon leave, Lina tries to run them down in the parking lot, but crashes into a parked car. The next day at Central, Getraer gives Ponch and Jon the details of Lina's arrest. She concocted a story about learning about explosives from her brother-in-law (who's been dead for a few years, which supposedly rules out the twin brother being a suspect), and through reading, and paying off a family "friend" to drive the van that hit Jon, then fleeing east – all a cover to protect Martin. Getraer closes the case. Ponch and Jon are back together on patrol, and decide to have lunch at the Mexican restaurant that T.C. took Ponch to days before. Again, they both play chicken, seeing who will succumb to the hot chili peppers' heat. They both chicken out and drink water. While they're having lunch, Martin is outside planting another bomb inside Ponch's motor. He's interrupted as they come out of the restaurant, and he sloppily closes the saddlebag, leaving it unlatched.

Back at Central, Getraer receives confirmation from back east that the family friend that Lina told Getraer about is bogus. As he goes to file the report, he passes by T.C., who's finalizing his paperwork for becoming a motor officer. He says something that triggers an idea in Getraer's mind: there's possibly a third twin brother that's after our duo. Out on patrol, Martin is following Ponch and Jon. He sets the timer on the bomb planted in Ponch's saddlebag. An erratic driver weaves in and out of traffic, and the duo pursues. Moments later, Martin speed up towards them, and Jon recognizes the van in his rear view mirror. They break the chase with the erratic driver and chase him instead. Back at Central, T.C. gets confirmation that there is indeed a third twin that could be after Ponch and Jon.

Then Jon notices that Ponch's saddlebag is unlatched. He alerts Ponch, and he opens it and sees the bomb. Ponch jumps over to Jon's motor. Ponch's motor continues rolling on its own. Martin Beck pulls off the road and jumps out as he sees Ponch's motor heading towards him. The motor explodes as it hits the van, causing the van to explode. They arrest Martin Beck.

Back at Central, T.C. is officially made a motor officer. Then Grossie announces who won the pool. The episode ends with freeze frames of everyone's reaction…..it's T.C.