Cora Gilford is forced to move from her home so she tried to kill herself and then gets in an accident. Derk, a 30-year motor veteran, is set to retire. CHPs play matchmaker between Cora and Derk. 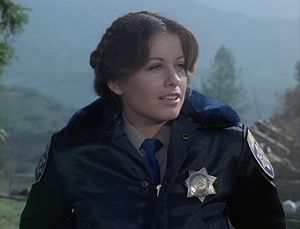 Ponch and Jon chase a woman (Cora) driving her truck recklessly. She ends up driving into a pond and Ponch wades in after her. It turns out she was attempting suicide. Ponch, Jon, and Sindy go to the Cora's house to drop her off later. After the briefing, Ponch and Jon respond to an accident. Some loose scrap cars could fall on an occupied car but Derk manages to tie down the load. On the freeway, Ponch and Jon are chasing a car which is chasing another car when Derk joins in. Derk pulls them over and the man in the first car turns out to be a P.I. who was taking the mother's daughter to the father. After their shift, Ponch and Jon ride out to Derk's place to check out his motorcycle collection. Meanwhile, Animal Control goes to Cora's house to take her animals. She can't take it and tries to drive off a cliff...but stops just in time. Just up the road, she swerves to avoid an oncoming car and flips over. The truck slides to the edge of the cliff. Luckily, Derk lives nearby so Ponch, Jon, and Derk ride up on some old motrocycles to save her. Just as Jon saves her, the truck falls over. At the hospital, Ponch and Jon convince Derk to take in Cora's animals. After the second briefing, Cora asks Derk out to dinner. Across town, the P.I. kidnaps the girl again. Ponch and Jon respond covering the 405 northbound. Sindy follows him on the freeway but loses him when he pulls off. Ponch, Jon, and Sindy split up, but Derk (aka Mary 9) finds him headed for the airport. When he arrives, his plane is ready and waiting. Derk chases the plane followed by Ponch, Getraer, and Sindy. Ponch sticks his stick in the elevator of the plane so they can't take off. They manage to stop the plane and everything is fine. That night, Cora moves her animals into Derk's garage and Ponch and Jon help.