Rally 'Round the Bank 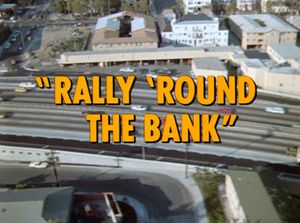 Bank robbers use a fake bomb and a rally race to carry off their heists. A visit from Ponch's mother. A safety citation for Ponch. 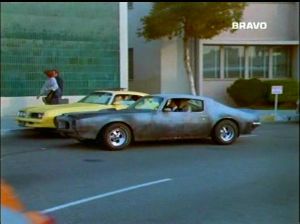 When two robbers rob a bank at the drive thru window, Ponch, Jon, and Baricza chase after them. After the robbers get away, they remove the flame decals from their sports car and head off to a rally.

Meanwhile, Ponch calls Sarge and finds out that his mom is coming! He immediately calls up a furniture rental company and has furniture delivered to his empty apartment. He and Jon arrive at the airport late and park in a no parking zone. After meeting his mom, Ponch brings his mom to his newly decorated apartment.

The next day, Ponch and Jon have lunch with Getraer and then some rally drivers. They head out and, assisted by Sindy, attempt to catch the bank robbers again. After losing the robbers, they go check out the rally checkpoint for the robbers. Later, Ponch and his mother discuss old times. She makes him feel guilty about moving away. Back at Central, Ponch and Jon get lectured by Getraer about being "given the slip" by "those jokers". Meanwhile, the robbers pull off another bank job. Ponch and Jon lose them after they sneak under another low clearance.

That night, Ponch brings his girlfriend to a disco square-dance. (It can't be described in words.) Getraer isn't into it, but Grossie and Ponch's mom watch on. When Ponch tells his mom how the robbers are using the rally as a cover, she suggests staking out banks along the next day's route. When they do so, Ponch, Jon, and Getraer all end up chasing the robbers after Sindy tends to an accident. Ponch and Jon chase them through the flood control channel while Getraer goes around to cut them off. They round the robbers into a side tunnel where the passage gets to narrow and the sports car gets stuck.

At the briefing, Ponch gets a safety citation for a year without any accident. They celebrate with a cake Mrs. Poncherello and Grossie made. Ponch says goodbye to his mom in his apartment parking lot just before she gets a ride to the airport in Sindy's cruiser. As Ponch is about to leave, he crashes into the cruiser. Everyone laughs. 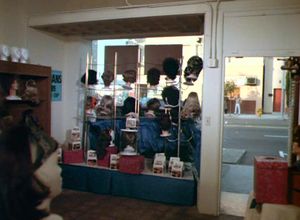