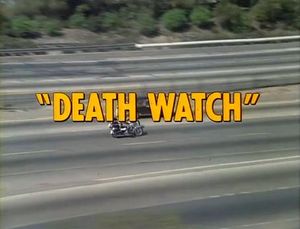 A woman swerves into other lanes while she drives, and Baricza, along with his partner Steve, pull her over. While they give her sobriety tests on the shoulder, another driver, Dennis, impatiently waits for Jon and Ponch to conduct a traffic stop. Once they do, Dennis has his opening, puts on an old style football helmet, and prepares to pull off a fake car accident to get the insurance payoff. The attempt is spoiled by a delivery van that gets in between him and his target, and the ensuing collision results in Baricza and Steve getting hurt.

Jon and Ponch arrive on scene, and aren't able to get any clear info, except that a van was involved. Steve utters "bird," which was the van's logo for Dove Deliveries. At Dove Deliveries, Abel, the van's driver, arrives and is shaken up. In discussion with his boss, we find that Abel has had a bad driving history. Taking precautions to keep Abel out of trouble, his boss gives him the rest of the day off.

At the hospital, Steve's wife arrives, where she and the CHPs find out that due to Steve's injuries, to include contusions, internal hemorrhaging and a skull fracture, he didn't make it, while Baricza is expected to recover. As they try to make sense of what happened, Getraer insists that Jon and Ponch get back on duty, further upsetting Jon.

Out on a movie set, Dennis is being chased by a police car until he goes airborne and crashes into a building. We find that he works as a stuntman for a living. Jon and Ponch are patrolling the freeway when an arrogant young man enters the freeway, driving erratically. When he's pulled over, he taunts Ponch with his smart aleck remarks. Jon has to take over before Ponch loses his cool. At the DMV, Dennis picks up his wife from work. We discover that their daughter had been killed in an accident, and due to Dennis' job, he's not eligible for insurance, so their daughter didn't get the care she deserved. With fake licenses supplied by his [reluctant] wife, Dennis plans to rack up insurance money using different identities.

At Central, Getraer finds Jon and Ponch working out in the gym. After informing them of the funeral arrangements, he has a small breakdown of his own before leaving. On the freeway, Dennis puts on his helmet and stages another accident, rolling off the embankment. Jon and Ponch arrive on scene and are soon relieved by Bonnie so they can meet with Getraer. Before they leave, Jon notices the emblem on a delivery van driving by, and realizes that a van with a similar emblem may have been involved in the accident with Baricza and Steve.

At a church across town, the duo is reviewing bird emblems when Getraer delivers the news that Baricza is coming around. Moments later, Turner wheels Baricza in. Back at Central, Baricza is able to identify the emblem of the Dove Deliveries van, and the CHPs go see about it. While they talk to Abel's boss, Abel arrives to work. When he sees the cops, he tries to make a run for it, but is stopped and arrested. At Central, Abel is a nervous wreck, but is able to give the CHPs a key clue about the helmet that Dennis wore when he staged the accident.

A funeral is held for Steve, followed by a procession. Jon presents the U.S. flag from Steve's casket to his wife. Afterwards, Jon finds Ponch thinking about the strange clue about the football helmet as they leave. On the freeway, Dennis straps on his helmet again and speeds down an off ramp past his target, then throws it into reverse, backing into the other car. When Ponch and Jon arrive on scene, Ponch recognizes Dennis from the accident the day before. They give chase as Dennis makes a run for it. Dennis sets up a contraction that steers the car, which allows him to jump onto a passing truck and make his getaway. The car then crashes into a busy intersection.

When Jon and Ponch have a look, they determine that the car was set up for crashes like a stunt car at the nearby movie set. They go to the set to have a look around, and find Dennis. He tries to sneak away in a car that has been rigged for another stunt, unbeknownst to him. When he tries to take off, the rear wheels come off, aiding in his apprehension.

Back at Central, the CHPs figure out Dennis' scam. Baricza comes in and makes Ponch believe that the director from the movie set is there to talk to him about a movie role. In the lobby, the director ignores Ponch and talks to Jon. The episode ends with freeze frames of laughter, as Ponch realizes he was pranked. 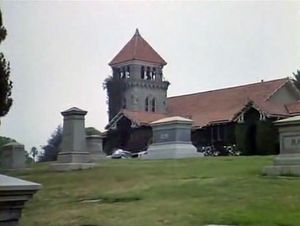