An illegal motorcyle race leaves a string of accidents, and Getraer thinks that CHP officer Steve McLeish's brothers may know who's responsible. Grossman finds it hard to get volunteers to help him entertain his visiting nieces.

Jon meets Grossie at the Family Fun Park and is about to have lunch with Grossie when Steve McLeish goes by chasing motorcycle speeders. Jon follows after them. The speeders leave a trail of accidents behind just before the theme. As they take care of the fruit stand accident, Jon attempts to piece together what happened. Jon and Steve go and visit Steve's brother to try to find out more information.

Back at Central, Jon discusses the accident with Getraer. Before the briefing, Grossie tries to get Jon to go to the fun park with him and his nieces on Saturday. Later, Ponch and Steve go to talk to Toro and see the "Indy" bikers. Jon questions him about them and gets nowhere.

After the commercial, Steve manages to get some information out of Toro. Back at Central, Jon and Getraer discuss the Indy racing. Later, Jon and Steve stake out Toro's garage. When Toro goes riding in the flood control channels, Jon and Steve are secretly following him.

The next day, Jon, Steve, and Harlan go out to a motorcycle track so Steve can practice racing against Toro. Steve ditches so that Toro will win. After Steve finds out Steve's youngest brother, Ted, moved out of Toro's house, Jon goes to talk to Ted. When one of the Indy racers sees Jon, he speeds off and Jon chases him. When he catches him, Jon arrests him.

Later, Toro finds out that Ted's going to race. He and Steve head to the flood control channel and his wife calls Jon. Jon's on his way and calls for backup on his truck's CB. After the commercial, he arrives at the flood control channel. As he drives in, the racers drive out. Jon chases them and is joined by Steve and Toro on their motorcycles. Steve kills Ted's engine. After they all stop, the other racer speeds off.

Steve calls for Baricza on Jon's CB while Jon chases after the racer on Ted's motorcycle.

Meanwhile Baricza sets up a roadblock with Turner, Clark, and Getraer. When Jon and the racer arrive at the roadblock, Jon manages to squeeze between cruisers by doing a wheelie. The other racer hits a cruiser, flips over it, and gets knocked out. At the waterpark, Grossie finds the whole CHP there to help him (and two of his female neighbors) watch his two nieces. 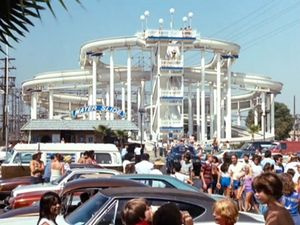