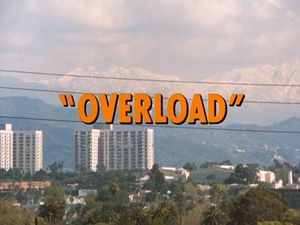 Two guys steal a valuable box of computer chips after one hides in the back of a truck overnight. Soon after, they are involved in an accident, and an old lady sees the guy in the back. The investigation is made harder because the brother of one of the robbers has hacked the CHP computer, affecting searches, paychecks and Ponch's "little black book".

A truck driver arrives late with his shipment and can't unload it so he leaves his truck so that his partner hidden in the truck can steal stuff. The next day, the delivery truck stops to avoid an accident and the back door opens up and a woman sees the thief in the back. When Ponch, Jon, and Grossie are checking out the accident, the woman is gone.

Back at Central, Harlan is trying to figure out why the computer is screwed up. Meanwhile, the one thief tells the other that he is the one responsible for messing up the CHP computer system. After lunch, Ponch and Jon respond to a call about smoke and find the woman cooking near the ocean. When Ponch walks the woman back up the hill, Jon samples her cuisine. Just down the coast, the thieves try to sell their stolen merchandise. After the woman tells everyone at Central about the man in the back of the van, Ponch unsuccessfully tries to get his black-book addresses from the computer.

The next day, Ponch and Jon are out riding water-bikes recklessly...their foreshadowing sport of the week. Meanwhile, the thieves try to kidnap the woman who spotted them when Ponch and Jon pull up in Ponch's car. Our heroes chase the thieves until they cause an accident. When investigating the earlier robbery, they discover that the truck was really a Trojan horse. When the thieves' resident hacker finds out that they stole stuff so he could crack into the CHP computer, he gets upset and they tie him up. After the briefing, Ponch and Jon are following leads and find the hacker tied up. He tells them to go to the docks. The thieves have already left when they arrive. Ponch and Jon have to ride water-bikes to catch them. After taking over the boat, they return to land where the woman identifies the thieves. They find out that she's working out well cooking at the "Grub Steak Cafe". Back at Central, Deena (the computer operator) is upset because when she finally gets Ponch's black-book out of the computer, her name isn't in it.

"It's more than I usually get, closer to what I deserve."

Getraer, just before he reveals his incorrect paycheck of $92,000.