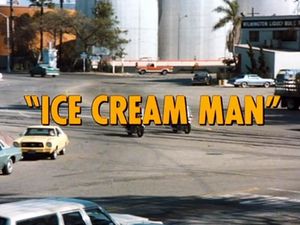 Tom, an ex-CHP officer who's just got out of jail, helps Bonnie when her cruiser is rammed by a stolen truck. He's working as an ice cream man as a way to see his son, who thinks he's dead. Jon and Ponch suspect he may be back in touch with his old criminal friends. Harlan has a problem with a skunk in his workshop.

A truck is running away from Bonnie when a crate falls off and causes an accident. The truck then backs up and rams Bonnie's cruiser. An ice cream man comes to her rescue and calls in the accident. It turns out that the ice cream guy was a CHP sergent 5 years ago; before Bonnie joined up. He went to prison for stealing trucks and just got out of jail 10 days earlier.

Back at Central, Harlan has a skunk trapped in the garage and Grossman got all stinky by looking for it. At the park, we learn that Tom's son thinks his father died while doing CHP work...and doesn't know that his dad is really the ice cream man. Later, Tom tries to join up with his old (bad-guy) boss. While the skunk is terrorizing the CHP garage, Tom steals a truck and uses a CHP radio to give false truck locations to the dispatcher. The bad-guy bosses stop following Tom, pull a U-turn, and end up running away from Ponch and Jon thinking that Tom turned them in. During the chase, they bad-guys hit a VW beetle and it rolls down a hill with its owner on the sideboard. Ponch climbs in it and stops it.

Back at Central, Harlan, Grossman, and Turner chase the skunk. When Tom steals another truck...this time with a buddy, Bonnie follows until they make a suspicious turn and she could blow her cover. Tom radios the CHP using police codes that tell Ponch and Jon where he's going...but the codes don't let his passenger know that he told them the correct location. The CHP surrounds the warehouse as the bad-guys torch it...with Tom lying inside unconsious. Ponch, Jon, Bonnie, and Baricza make the arrests and then Ponch and Jon go in to save Tom and the big boss. Just as they leave, the warehouse explodes in perhaps the biggest explosion in any episode. Back at Central, Tom tells his son that he is his father. The son, Tommy, goes out to see Harlan and comes back smelly after chasing the skunk away. Nobody wants to get near him except his father.