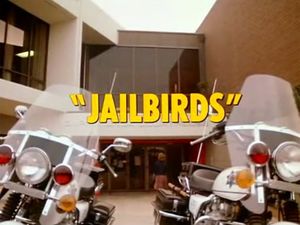 First Jon, then Jon and Ponch get put in jail for contempt of court when they refuse to name their informant. Getraer gets the rest of the team searching through parking violations to prove the defendant was no stranger to the raided warehouse.

Ponch and Jon are on their way to a court hearing, when a car passes them, speeding. They pursue, and the car crashes, unearthing a tree. Ponch and Jon separate the occupants of the car, and cuff them. The tree begins to fall, and Ponch pushes the crook out of the way so he doesn't get injured. The crook uses it as a chance to get away, then Jon tackles him, then while cuffing him, realizes how badly he'll look in his dirty uniform when he gets to court as the theme begins.

In court, Jon is on the stand, recounting a conversation that he and Ponch had with their informant about Nick Ferris, a criminal they suspect of heading up a car stripping ring. In Jon's flashback, the A-shift, along with some plain clothes men, stage a raid on a warehouse where Ferris is located. Ferris acts as if he was there by accident.

As the story continues, Jon again mentions the informant, but doesn't give his name. The judge insists that Jon reveal the name of the informant, due to a curve ball thrown by the defense attorney representing Ferris. When Jon refuses, the judge finds him in contempt, and has him locked up. Jon spends a little time behind bars while Getraer tries to iron things out. Getraer cannot contact the Attorney General, so he pleads his case on Jon's behalf to Judge Towers. Still, Towers refuses to back down.

Meanwhile, Ponch is visiting with the informant, trying to convince him to take the stand, or at least give Ponch permission to reveal who he is, so his partner is released. The informant defiantly refuses, forcing Ponch to honor his promise to protect his identity. Back at Central, Ponch and the gang banter before the briefing. Then Jon arrives, announcing that he was released at 5am that morning. Before he gets to enjoy his new freedom and the prospect of going back on patrol, Getraer tells both him and Ponch that they both have to appear in court…..again. Out on the freeway, a group of kids come upon a manure truck and decide to tamper with the load. They pull alongside it and cut the ropes, bags of manure spilling over the road. Jon and Ponch pull over to help, when suddenly, several bags of manure split open, spilling all over their uniforms. They show up in court, dirty and smelly. Their attorney covers for them with an explanation.

Ponch is called to the stand. And like Jon, goes through the story, but doesn't mention the informant's name. Just as before, the judge insists that Ponch reveal the informant's name. At Ponch's refusal, the judge finds him in contempt, and orders him under arrest. He gives Jon another chance to redeem himself, but he chooses to save the court some time and surrenders himself as well. The duo is booked and taken to their cell.

This infuriates Getraer, and he gets on the phone to attempt to make contact with the attorney general once more, to no avail. After the failed attempt, he pleads with Judge Towers. That gets him nowhere, but they do conclude that if they can prove Ferris' presence at the warehouse, they'll still have a chance to put him away. Getraer goes by the warehouse to look around. He notices that several cars have been ticketed for illegal parking.

Back at Central, Getraer shares his idea of linking a parking citation to Ferris' presence in the warehouse, and assigns Baricza, Grossie, and Bonnie to go to LAPD to search their files for any citations Ferris may have accrued. Back in jail, Ponch and Jon are eating chow. Some men at the table speak of rumors that they're hearing that their newest jailbirds might be cops. Jon covers, saying that they're school teachers. At LAPD, Baricza comes across a citation that Grossie got while illegally parked at the beach – his supposed sick day. Just then, Getraer comes in with lunch, and looking for an update on their findings. Moments later, Baricza sees a ticket for Ferris. Thinking their off the hook, Grossie prepares to leave, but Getraer tells them to keep looking. The more citations, the better their case against Ferris. Back in jail, the inmates are watching a nature film. Jon talks with a drunk that he and Ponch saw earlier making a fool of himself as they were getting booked. He explains that he'd never really drank before, but he'd gotten a raise at work, so he decided to celebrate. But got carried away and got out on the road with his shenanigans. He reveals the worst part – he's a school bus driver. It's time for lights out, and the guard shuts off the television. Ponch falls asleep while Jon opens up about his current experience.

The next day, Getraer is presenting his evidence to the judge, and he has Ponch and Jon released. Entering the courtroom in their smelly uniforms, they stand before the judge as he delivers an apology to the duo, and commends them on their integrity. Everything is nearly set right, but Ferris is still out on the streets. Ponch and Jon visit the informant and demand to make things even by tipping them off on Ferris' location. He agrees and reveals the location, swearing that he'll be there because Ferris is selling out.

The next morning, Jon and Ponch stake out the warehouse. Surely enough, Ferris comes walking out, and spots the duo watching him. He tries to get away, but rolls his car when trying to avoid a collision with another car. Ponch and Jon emerge victorious. Back at Central, they're knocking off for the day and changing into plain clothes. When they open their lockers, they find them set up like jail cells; jail jumpsuits hanging inside. They realize they've been had, and calls out their friends, who were hiding behind some lockers. The show ends with a freeze frame of the duo throwing the jumpsuits into the faces of Baricza, Grossie, and Bonnie.