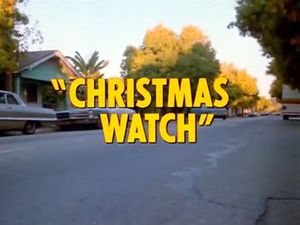 A pair of thieves are robbing houses in the run-up to Christmas. Ponch is feeling down because he longs for a family Christmas, and doesn't know his mother is flying in. 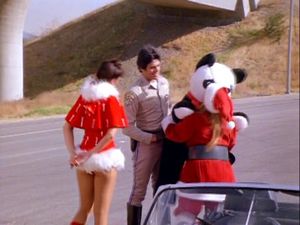 Ponch returning the stuff Panda Bear back to Mrs. Claus and her Elf.

Bonnie wearing a pair of Aviator Sunglasses while chasing the Suspects.

A church's bell is about to be hung just prior to Christmas but it is stolen. When the Reverend chases after the bell, he loses them. Luckily, Ponch and Jon are just around the corner.

At Central, Getraer shows up with a Christmas tree. After the briefing, the bell thieves steal a station wagon which was for sale. Meanwhile, Grossie is instructing everyone how to decorate the tree. Ponch gets upset and leaves because he wants a "real family." As he leaves, three drunk guys pull into the CHP gas pumps. Nearly the entire CHP takes care of their car and then arrests them. When the woman who had her car stolen shows up, Jon realizes that she was called in by a fake officer and left her home unattended. He goes off to save her house.

Meanwhile, at the house, the thieves took all the Christmas presents. After some holiday season music and CHP work, we join our heroes at the CHP Christmas party. The CHP gives Getraer training wheels and a bag of sand for grease spots. Moments later, Ponch's mom appears at the party. Ponch's concerned Mom asks him about his motorcycle accident (probably in "Return of the Supercycle"). Later, the thieves get in an accident, give the guy $1200, and drive off. Baricza calls it in and Ponch, Jon, and Bonnie respond. They all manage to box in the van.

That night at the church, the CHP shows up with the bell in the middle of "Silent Night". While the kids are ringing the bell, the CHP gets a call and moves out. They'll be on duty while we sleep in heavenly peace.