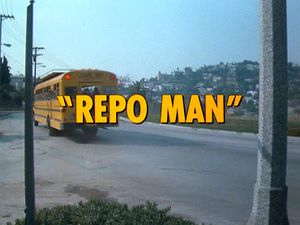 Ponch and Jon stumble upon a repo man's racket.

Grossman is slipping "Highway Patrolman" magazines into mailboxes at Central. A school bus filled with misbehaving kids has a a skateboard get stuck under the brake pedal; the driver clutches his chest as he struggles with the skateboard. The driver passes out and one of the kids steers the bus. Jon, finishing up a ticket, sees the bus and begins pursuit. He verbally instructs the driver to pull the key out of the ignition, but the kid cannot reach it. Jon gets ahead of the bus and jumps from an overpass onto the bus and brings it to a stop.

Ponch arrives on the scene and radios for a paramedic and ambulance. A news crew arrives and films Ponch and a doctor administering CPR to the bus driver. Jon stops off to get his watchband replaced. While on their beat, Ponch and Jon come across a couple arguing with a repo man, Mr. Ware. Ponch and Jon tell Mr. Ware that he is illegally repossessing the couple's trailer and that he must release it. Ware responds with a threat and a demand for their names.

Back at Central, Jon is congratulated for his daring bus rescue. Getraer speaks to Jon and chastises him for "a flashy circus stunt." He assigns Jon to participate in a Pioneer's Day Parade in Calabasas; he asks Jon to ride his horse in the parade. Sindy catches Jon in the hall and asks if he will meet her two cousins who saw his rescue on the news. At a restaurant later that evening, Jon meets Sindy's two male cousins; Jon was expecting two female cousins. A calamity ensues at their table when the waitress realizes that Jon is the "hero" from the news. Jon is surrounded the next day by fans when he leaves the antique store where his watch is being repaired.

The repo man makes a call to Mrs. Jessup and convinces her that her son has been hurt at school. As she leaves her place of work, he approaches her and tells her that her son is not hurt, but that Otis Jessup has not been making payments on his car. On the freeway, Otis Jessup tries to run Ware, who is towing Jessup's repossessed car, off of the road. The car comes detached and rolls over on the freeway. Jon cites Otis Jessup for reckless driving; Ponch cites Ware for the same.

Ware returns to his office and places a call about the credit ratings of Baker and Poncherello. Jon goes to a saddle shop and they demand that he pay cash because his credit rating is bad; Jon is perplexed. Getraer confronts Jon about his "problems" and points out that something is also going on with Ponch. Under cover of darkness, Ware repossesses another car while Ponch and Jon, both off-duty, look on. They follow him back to his office where they see him remove the license plate from the car. The next morning Ponch and Jon wait outside of Ware's office as he leaves. Ponch takes down the license plates of the cars on Ware's lot. Jon tails Ware and spots him handing the license plate to a guy at a salvage yard who proceeds to attach it to a wrecked car. Ware photographs the wrecked car and pays off the worker for a previous job.

Ponch and Jon meet up with Getraer to whom they explain what they think Ware is doing. They want a chance to catch Ware in the act, behind the wheel of a stolen car. The next day, Ponch arrives at Ware's office and he confronts Ware about the false information he gave regarding his and Jon's credit. Ponch then confronts him about the cars on his lot and lets him know that he is on to his racket. Ponch leaves and returns to where Jon is waiting. They see Ware leave in a Ford Thunderbird and they follow. Seven Adam and Mary Five join the chase. When ware can go no further, he gets out and tries to escape on foot before taking control of a construction vehicle. Ponch and Jon pursue on foot and when Ware gets stuck, they arrest him. Grossman puts out a fire the started during the chase. Grossman becomes a hero.