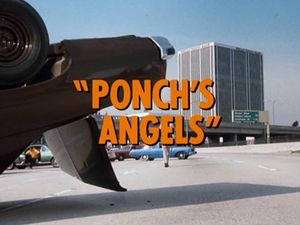 Ponch is unhappy being paired with a female trainee (Jon gets paired with her friend), especially when his girlfriend thinks that something is going on between them. A trio of escapees go looking for buried treasure. A couple are snatching purses at the marina.

Ponch and the rest of the CHP chase a stolen police cruiser. It runs off the road and causes an accident. At Central, Getraer lectures Ponch about not following orders. Getraer assigns Ponch as the training officer for the first female motorcycle officer, Melanie Mitchell. In the parking lot, Melanie gets used to her motor while Ponch and Harlan watch.

Down by the water, Jon and Bonnie check in with Grossie at the CHP recruitment tent. Nearby, some thieves snatch a purse and get away with it. Out on the streets, Ponch and Melanie pull over a van where the driver is wearing headphones and thick sunglasses. As they get ready to go, Melanie tips over her motor and rips her pants. They go to Ponch's place so she can change. When Grossie and Ponch's girlfriend, Jennifer, show up, Melanie answers the door in a bathrobe. Grossie and Jennifer run off.

Back at Central, Jon is assigned to train Paula Woods. When Ponch and Melanie walk in to the briefing room, they get whistled at. After a busy day, Ponch, Melanie, Jon, and Paula head back to the report room...but Ponch slips out. That Friday night, at Ponch's party, Jennifer gets jealous and leaves. Meanwhile, the escapees search for their treasure.

The next day, Turner chases some kids who were drag racing. They cause a bottled water truck to spill. Ponch responds and tells Melanie to stay put. She doesn't. When the car flips over, Melanie helps Ponch pull a woman out just before it explodes.

Back at Ponch's apartment, Ponch chews out Melanie for not following orders...but ends up kissing her as "To Be Continued" appears on the screen