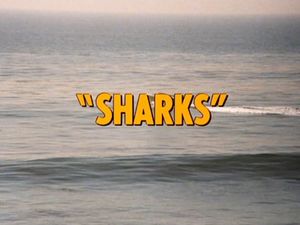 Jon and Ponch think they've disrupted a drugs drop while scuba diving, but have a hard time convincing Sgt. Aikens, an LAPD narcotics officer. Harlan lends the department his hill-climbing Mustang to help catch the drug gang. They are also helped out by Toni and Sharon and their boat with a shark cage.

Ponch and Jon finish up a day of scuba diving when Ponch smells smugglers. They can't chase the ones in the boat so they go after the lookout on land. They let the guy get away when they stop to help an overturned kelp truck.

After filing reports at Central, Baricza chases someone trying to make a getaway. He's soon joined by Ponch who notices the car he and Jon were chasing earlier. On a tight turn, Baricza almost drives off a cliff. After Ponch and Jon help out Baricza, Ponch check out the car he spotted. When a caterer leaves the suspect's house, Ponch pulls over his truck for nothing except to ask some catering questions. After talking to Getraer, Harlan tells Ponch and Jon to meet him at 8:00 that night. In his garage, Ponch and Jon learn that Harlan has a hill racer similar to the suspects.

The next day, Ponch, Jon, Bonnie, Baricza, and the kelp women go scuba diving. At dinner, they have kelp salad. Later that night, Ponch and Jon take pictures of the license plates at the suspects' house. Minutes later, they crash the party and take more pictures. When they come up with a lame excuse for being at the party, they leave and are followed. After starting a drag race with the guy, they turn around and head the other way.

After the briefing the next morning, Grossie chases the suspect car and is joined by Turner. The suspect turns off on a side road and Ponch and Jon follow to observe. When the smugglers spot Jon, they abandon ship and sink it. The lookout on the hill drives off and right by Jeb and Grossie and is chased by Bonnie in Harlan's hill racer. When Bonnie finally catches up to the suspect's car, the suspect is scuba diving into the water.

Ponch and Jon contact their kelp girlfriends and use their boat to search for the sunken contraband. When they arrive at the sunken boat, the smuggler is there...and so is a shark! Ponch and Jon get in the cage and ride down in safety. Under the sea, either Ponch or Jon (I can't tell in the SCUBA gear) hurts a shark...and they manage to get the smuggler into the cage. In the end, the CHP gathers for a small party with kelp salads and "shark meat" burgers.