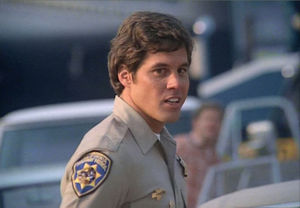 Barry Baricza is a patrol officer for the California Highway Patrol's Central area (southern division). His friends call him "Bear".

Officer Baricza has been seen drawing a weapon to protect himself three times. The first was when he encountered a group of men running a casino in a motor home and held the shotgun from his patrol car.[1] He drew his weapon next in "Peaks and Valleys".[2] Finally, he pulled his service revolver after being beaten and knocked to the ground by a minor who knew karate and was threatening him with a weapon.[3]

For a short time, Barry quit the CHP to work as a crop duster for his father. He's a pilot and flight instructor. His father (who is also a crop duster) taught him how to fly.[4]

He was injured in a hit and run which killed Officer Steve Wydemeyer.

The three times Baricza draws a gun are the only three times any officer draws his weapon in the entire series.