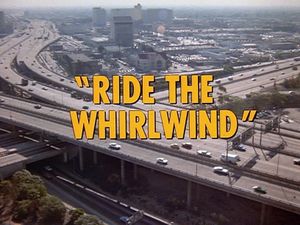 Jon is creating a new form of CHP and plans to use it to get Sindy on a motor. When asked for volunteers, Grossie is enthusiastic about it and Sarge forces Jon to pick him. Sindy shows up after the briefing and is upset she wasn't picked. Later, Ponch, Jon, and Grossman get a good workout at Indian Dunes. Sindy shows up and rides with them. Grossie takes a spill but we learn that he's not really hurt and Ponch paid him off to do it. Grossie admits he would have done it himself, but plans to take Ponch's money anyway. Sindy takes over for Grossman and Getraer expresses his concern.

When Jon and his team goes out on patrol, they split up. Jon is threatened by a woman and her dogs. Menawhile, Ponch comes across a councilman who's riding in a restricted area. Even though he owns the land, Ponch cites him. Down in the valley, Jon comes across a man chasing chickens on his bike. Jon cites him and has him and his girlfriend follow him back to the woman's house to apologize for ripping up her garden. Soon, Sindy's chasing two bikers across some rough terrain. One of the bikers kicks her down into a riverbed. Ponch finds her injured and limping but she doesn't give up.

Back at Central, Ponch wheels Sindy down the hallway so that she doesn't have to walk and give away her injury. Later, Jon stops by her apartment and confronts her about her ankle. They get in a shouting match and Ponch breaks them up. Sindy agrees to visit the doctor.

Out on patrol the next day, Ponch chases the councilman. Ponch knocks him off his bike just before it goes off a cliff. Meanwhile, Sindy finds the outlaws' hideout. She calls for Jon and chases after one of the outlaws when he takes off. As Jon arrives, the two other outlaws leave the hideout and cause it to explode. Jon apprehends them. Down in the riverbed, the outlaw sets a bush on fire. Ponch comes along and puts the fire out while Sindy goes after the outlaw again. She catches him and finds a baggie of drugs.

Back at Central, Getraer commends them on a job well done. As Sindy, Jon, and Ponch leave, Jon says the woman Ponch spots is waiting for a "macho" man. She's Jon's date. Everyone appears and laughs.

"Hey, what are you? Something out of Star Wars?"
-Harry (commenting on Jon's BMX uniform) 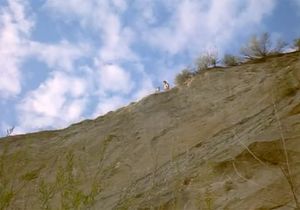