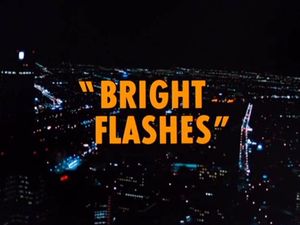 A pair of thieves use a laser to blind their victims before committing robberies. One of the witnesses is Wayne Cato, a cowboy actor and boyhood hero of Jon, but he's reluctant to come forward with information.

Ponch enters a race and crashes when he's blinded by a laser. The next day, after Ponch's sight returns, the laser operators blind everyone at a bank and steal a money delivery. Harlan signs up Ponch and Jon for a laser light show to demonstrate their effect. Ponch and Jon are called out to Wayne Cato's house where they're given a description of the van that carried the laser.

Meanwhile, the laser guys rip off a check cashing liquor store and Turner chases their van but is blinded and causes an accident. Ponch and Jon track down the van's owner (Rich) and arrest him. Wayne ID's the kid just before Scotty (the other laser guy) comes in to brief the CHP on lasers. The next day, Ponch is back racing (antique cars this time) while Bonnie visits Rich's school.

At the racetrack, Rich and Scotty rob the ticket office and drive off. Jon gets on a horse to chase them while Ponch follows in the antique car. Jon periodically ducks to avoid the laser (he's quick!) and finally jumps on the laser equipped truck and stops them.