Ponch and Jon go undercover at a raceway to probe a drug ring. 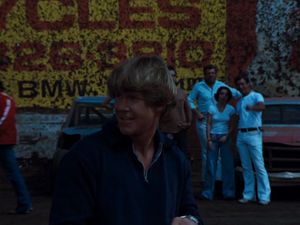 Jon being sneaky with a microfilm camera during the race Ascot Park.

During a beautiful Saturday night at Ascot Park where the “Fear 250” stockcar race has just been announced, and the old male referee is actually carrying an official orange flag in his left while holding up green one with his right hand. While the crew members go around checking out the qualified drivers such as an old man by the name of Bones Bateman who happens to be smoking a cigar, and Jon happens to be in the pit area getting ready to watch Ponch compete in the “Fear 250” stock car race. When the crowd starts cheering for the drivers in the grand stands, and the old male referee starts using the green flag in order to let the drivers go in sections for the “Fear 250” stockcar race. When Jon decides to cheer for Ponch who happens to be driving in the beat up looking red/white/blue Chevrolet Chevelle with a number thirty-two painted on the doors, and the “Fear 250” stockcar race gets off to a good start when the old male referee finally waves the green flag with his right hand. While Ponch starts off trying to win first place, and is actually unaware that he happens to competing against a mysterious blonde haired woman named Laurie Windsor who often calls herself Billy Wakefield who happens to be driving a beat up looking red Ford Mustang with a number twenty-seven painted on the doors in the competition. When Laurie along with two other drivers try to gang up against Ponch who happens to be in first position during the time of the competition, and Jon is actually cheering for his friend who happens to be in lead for a change of trying to win the “Fear 250” stockcar race. All of sudden the number eleven car accidentally wrecks it’s suspension after hitting the dirt hill, and Bones finally cuts off Ponch for the lead position which soon backfires when his car finally stalls after running over a piece of wood causing him to hit the wall. When the old male referee has wave the yellow flag using his right hand, and Konte E.N.T. Towing Service soon arrives in order to give Bones a push back into the pits. While the old male referee soon decides to wave the green flags using his right hand in order to resume the “Fear 250” stockcar race, and Bones soon arrives back into the pits after being given a push by Konte E.N.T. Towing Service. When Bones finally decides to climb out of the window of his wrecked car, and Jon happens to be standing right next to Ponch’s Firebird along side his personal truck. After Bones has just finished removing his racing gear equipment in order to walk away in anger, and Jon will easily grab microfilm camera that is actually hidden inside the mechanics rag from their portable toolbox in order to walkover towards the car. Jon will open the hood of the stalled car that belongs to Bones by undoing the pins on the right side, and will take a picture of the engine inside the compartment with a microfilm camera. After Jon has just finished taking a picture with a microfilm camera inside engine compartment of the stalled stock car that belongs to Bones, and will soon closed the hood in order to walk away. 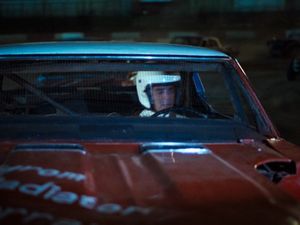 Ponch happens to be inside the lead of the "Fear 250" stock car race.

As the show opens, Ponch is racing car 32 in the "Fear 250" stock car race. When one driver leaves the race, Jon peeks under his hood and takes a picture. Soon, Ponch has to end the race because of car trouble. When he meets up with Jon, we learn they're undercover. When they meet Sarge and Baricza, we learn they're looking for stolen cars. Getraer informs them they're now looking for drug smugglers. That night, they head over to "The Pit Stop" and order some beers.

The next day, Ponch conducts repairs on the stock car while Jon gets coffee. That night, Ponch is out racing again and wins $100. The next day, Jon, Bonnie, Grossie, and Getraer all play handball. Later, one of the racer's car catches on fire during a race. As Ponch and Jon put it out, he's shouting "Let it burn!" That night, Jon's out racing.

Later, at the bar, Ponch sweet talks a woman racer. When Jon shows up, he tells Ponch the car's transmission was stripped. Since they can't get another car, Ponch decides to enter the destruction derby. Soon, one of Ponch's ex-schoolmates recognizes Ponch and almost blows his cover. The next morning, Ponch, Jon, and Getraer discuss tactics while jogging. Later, Ponch and Jon head to the junkyard where a forklift is moving old cars. They find one of "Bones"'s old wrecks and some drugs inside.

Back at the track, a driver with a broken arm offers them his old car to use in the destruction derby. When Jon gets called to the office to for a phone call, two guys stick a bomb in his truck. They also stick one behind the seat in Ponch and Jon's stock car. After the commercial break, Ponch heads out in the destruction derby. While cheering on Ponch, Jon notices a wire on the ground. He opens his truck's hood and defuses the bomb. After not finding one in Ponch's car, he heads out into the derby. When Ponch ses his car, he heads over to it. Then he climbs out of the stock car and into his own. Seconds later, the stock car blows up. Trying to catch the guy that tried to kill them, Jon flips Ponch's car and totals it. In the end, Ponch decides it was worth it to save his life.