Ever since I saw Primer, I’ve had a theory that it’s a good idea to avoid any movie that’s written, directed, and produced by the same person that stars in it. While there are occasional exceptions to the rule (like Spaceballs), it generally works and has spared me from garbage like Tyler Perry’s Madea movies. CHIPS was written, directed, and produced by its lead actor, Dax Shepard and is yet more evidence that these self-created movies are best avoided.

I had seen the trailers and the 18% Rotten Tomatoes score, so my expectations were quite low. Still, when the logos started coming up on the screen and I thought I heard the familiar five notes from the original John Parker “CHiPs” theme, I had a glimmer of hope. Seeing “CHiPs” creator Rick Rosner listed as a producer made me wonder if maybe the trailers had misled me. Unfortunately, for fans of the original series, the CHIPS movie is like a bizarro version of what we’ve enjoyed for the last 40 years.

Imagine an alternate universe where Jon is the rookie cop fresh out of the academy and Ponch is the law enforcement veteran. Imagine Jon is the one on probation and Ponch is the calm one with sage advice. Imagine Jon getting his uniform dirty and Ponch is the one trying to set him straight. That’s just the start of how different the movie is from the TV show. This movie really isn’t even “CHiPs”. It’s a motorcycle buddy-cop movie with raunchy humor and unnecessary dismemberment. As seen in a disclaimer at the beginning of the movie, the California Highway Patrol wants nothing to do with it. Other than the title, the character names, the CHP, and motorcycles, it’s completely different from the “CHiPs” TV series. In fact, “Ponch” isn’t even Ponch. He’s an FBI agent and “Francis Llewelyn Poncherello” is merely his cover name. His real name is Castillo and he has a bad habit of shooting his FBI partner.

The movie has a few moments that started to give me hope. One point was when “Ponch” and Jon are riding on the highway and a car speeds by them. Jon takes off in pursuit. This actually reminded me of when Larry Wilcox and Erik Estrada’s Jon and Ponch would be patrolling the highways in countless episodes, get passed by a speeder, and pull him over. However, when they pull over Ed Begley Jr. in this movie version, Jon is out of control and insists on ticketing him. As the other CHP officers arrive, Ponch fights him and resorts to kicking him. The nice moment we had where we could start to feel like we were watching an updated version of “CHiPs” was quickly torn away.

This happens multiple times. You may start to feel like things are coming together and maybe the movie will start to slip into something enjoyable, but then the moment gets ruined by talk about “ass-eating” or a sexting scene. 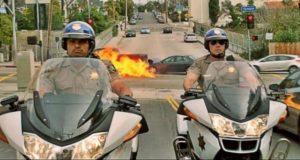 This scene from the trailer isn’t even in the movie

Michael Peña’s a wonderful comedic actor and does a pretty good job with what he’s given here, but he constantly looks uncomfortable on a motorcycle. However, the best performance in the movie is undoubtedly from Vincent D’Onofrio as the lead bad guy. Although I wasn’t clear at all on what the bad guys were trying to accomplish (something about smuggling $14 million out of the country by buying a painting, rolling it up, and flying out with it), I really enjoyed most of the scenes with D’Onofrio. I also really enjoyed seeing Jane Kaczmarek (best known as the mom on Malcolm in the Middle) as their CHP supervisor…but I’m probably biased because I’ve known her for about 30 years and she picked me up at LaGuardia once.

What I didn’t enjoy were the gratuitous nude scenes and the unnecessary dismemberment. However, it’s interesting to note that every nude shown was shown via cell phone screen. There’s also a lot of gay panic jokes. Oddly enough, the one seen in literally every ad for the movie (where Ponch face-plants into Jon’s crotch and drops him into the tub) is what got the most laughs from the audience in my theater. It seems like Shepard was aiming for Deadpool-style R-rated humor. Like his version of Jon Baker, who can’t seem to shoot a stationary target, he missed the mark…repeatedly.

Erik Estrada has a cameo in the movie towards the end and it was genuinely fun to see him on screen. However, it serves as a reminder of what this movie could have been.

The original Star Wars also premiered in 1977 and that universe is getting more continuing tales that expand its universe. Star Trek is 11 years older, but was rebooted in 2009 to great success. 21 Jump Street earned $138 million and a sequel brought in $192 million. When Mission: Impossible was remade, they didn’t make it full of frat house humor.  These are just some of the examples of how it’s possible to build from an existing franchise or reboot it. Unfortunately, CHIPS is not one of these.

The most frustrating part of CHIPS is what it could have been.

Patrick Delahanty created “CHiPs” Online in 1995, has seen every episode of “CHiPs” multiple times, and is still really annoyed that he was not invited to the CHIPS premiere.