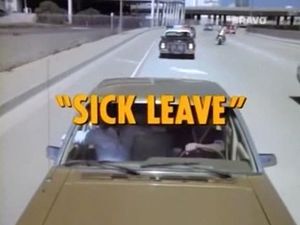 One of Jon and Ponch's fellow CHP officers is displaying strange and worrying behavior. A fraternity statue is stolen.

Andy dropping off his son Chris. 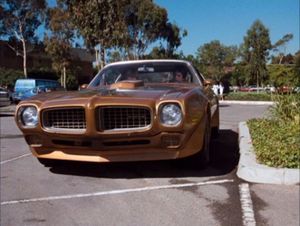 Ponch and Jon getting out of the car.

Jon and Ponch are having lunch across from a local college campus with a fellow officer, Andy, until two frat brothers steal the dean's car as part of a prank. As they chase the car, Andy drives like a maniac and flies off an embankment, cutting off Ponch and Jon on the street below, causing Ponch to fly off his motor. Andy actually gets upset when he's confronted by them. Back at Central, Andy kicks Grossie out and speaks to them in the report room. He apologizes profusely about yelling at them, and then begins to cry. His son, Chris, walks in to check up on him. They originally had dinner plans, but since Chris's professor gave him an assignment that'll tie him up for a couple of nights, that frees up Andy to have dinner with Ponch and Jon at Ponch's place. On campus at Chris's school, a rival fraternity is stealing a statue using a helicopter. Chris and Andy drive by and see the theft take place. Chris tries to tell his father to go after them, but instead of doing so, he breaks into laughter at the sight. Later at Ponch's apartment, Andy exhibits strange behavior: making short, snappy comments, excessive sarcasm, and paranoia. Oddly, Andy tries to pay Ponch for the dinner he prepared. When Ponch refuses to take it, Andy flips, then storms out. The next day at briefing, Jon and Ponch ponder confiding in Getraer. Out on patrol, they decide to stop by the college library and speak with Chris. They discuss the behaviors that they've observed from Andy, and Chris asks them to try and get through to his father, since he feels that he can't. Out on patrol, Andy comes across a convertible dropping a bag into a garbage barrel. 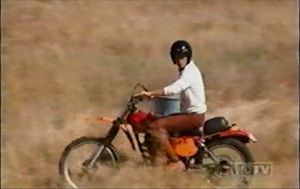 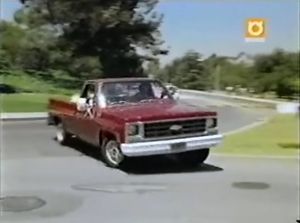 The two frat brothers driving around in a truck.

A moment later, a man on a motorbike comes around and picks it up. Thinking it's a drug deal, Andy chases the man on the motorbike, until he goes up a steep hill with ease and Andy can no longer follow in his cruiser. At Central, he finds out that it was a ransom payoff to get back the statue that was stolen. As Andy leaves, he collapses. Ponch and Jon go visit him at the hospital. As they walk across the parking lot, Andy crazily drives up and nearly hits them, then hops out, claiming that he has a clean bill of health. At a warehouse, the frat brothers are breaking in to steal back their statue. They make off with it just as the rival fraternity arrives, and they being to chase each other. They speed past Andy, and he pursues them. Andy's vision begins to fail him, but he stays with it as Jon and Ponch back him up. They make it to the college campus when the frat brothers with the statue start fighting. Andy nearly causes another accident when he cuts off Jon and Ponch as they circle a roundabout. Andy still doesn't realize that his judgment is questionable, so Ponch and Jon visit his doctor at the hospital. There, they find out that Andy has a brain tumor. This devastates Chris. Out on the freeway, Jon and Ponch confront Andy and tell him they'll go to Getraer unless he quits risking their lives while trying to work with his condition. Meanwhile, the leader of the two frat brothers that stole back their statue is plotting to take down their rivals for getting him suspended. 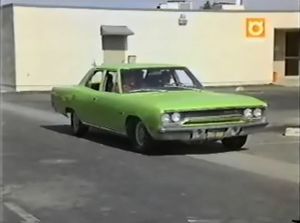 A sumblime Plymouth during a police chase. 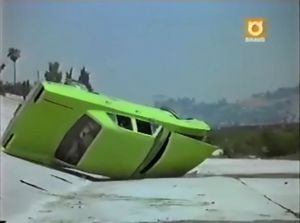 The Plymouth rolls over ending a police chase.

Back at Central, Getraer lets Jon and Ponch know that Andy did talk to him. But, it wasn't about his condition; it was a filler conversation about some party at a strip joint, with Ponch being the point man. Out at the college, two of the rival frat brothers are taking their girlfriends out on a picnic. The kid that was suspended follows them in his car. On the freeway, Jon and Ponch find Andy asleep on the shoulder. When Andy makes a comment that it's dark and looks like it's about to rain when in fact it's sunny, they realize that Andy's going blind. As they make a last effort to convince Andy to leave street duty, the cars drive by, with the suspended frat brother sideswiping the other car. Despite Ponch and Jon's pleading, Andy takes off after them. Andy struggles to keep up the chase, but manages. They leave the freeway and continue through city streets, until they go off road and the frat brother runs the other car into the L.A. River. The car flips over and catches fire. Everyone makes it out of the car except one of the girls, and Andy tries to save her. The car explodes as he's running away with her in his arms, and a piece of shrapnel becomes lodged into his back. Andy dies on the scene. Back at the college (presumably days later), the two fraternities are holding a memorial in Andy's honor, with the statue back in its place. The show ends as Ponch and Jon make a deal with Chris to sneak back on campus that night to put some sunglasses and a cigar on the statue in remembrance of Andy. 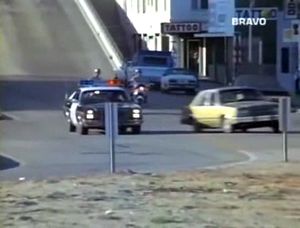