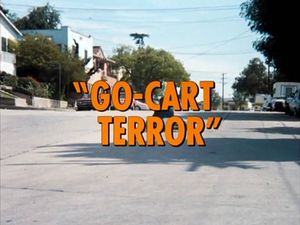 The team are on the lookout for a green and white truck robbing stores when they're closed. Jon and Ponch coach some young go-cart drivers for a race against the fire department.

On patrol, Ponch and Jon help a girl who fell off her bike. As they see if she's OK, some teenagers ride by on go-carts. One stops to apologize. After the other go-cart gets away, Ponch returns to find Jon.

At the briefing, Ponch realizes he saw the thieves leaving the Price Bros store. After the briefing, everyone's wondering if the go-cart driver was a member of the CHP's go-cart team.

Later, the "Special Guest Stars" are stealing office equipment. Baricza's the first in pursuit and Bonnie soon joins in. After the commercial, Ponch and Jon join the chase. Not far down the highway, Mike's truck loaded with all the office equipment rolls down a hill. He runs off before Ponch and Jon arrive.

That afternoon, Ponch takes charge of the go-cart club meeting. As he and Jon leave, Ponch notices Wayne's helmet...the same one the reckless driver was wearing.

The next day, on duty, Ponch goes to talk to Wayne but spots him on his go-cart in the street. Wayne ends up making a van splash into a lake so Ponch stops to help. Wayne turns around and comes back to call it in for Ponch. Ponch dives in and pulls the woman out. After everything turns out fine, Wayne admits he just wants his parents to come home.

At the go-cart track, Ponch and a fireman challenge each other to a race. Ponch goes off the track and loses. To raise money, the go-cart kids hold a car wash. All the CHP officers show up and end up having a water fight. At the go-cart race, the CHP is behind the fire department up until the last race where the CHP wins 14 to 12.

The next day, Baricza checks out a closed warehouse claiming to be having a sale. After looking in the window, he drives out back and spots the truck. After calling it in, he chases them. Ponch and Jon join in, dodge some thrown furniture, and stop the truck on an unfinished part of the highway.