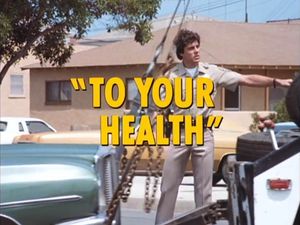 A farmer is convinced that a series of accidents are the work of a large company trying to put him out of business. A young sailboarder catches Ponch's attention when he causes a couple of accidents and his father doesn't seem to be interested.

Ponch and Jon chase a truck that has a loose wheel. When it loses the wheel, causes an accident, and rolls over, the driver claims someone's trying to kill him. After the accident is cleared, Ponch and Jon find the driver, Tom Catlin, unloading at a nearby health food store. Tom tells Jon how he's the subject of several bizarre accidents caused by Glinco Industries. In the CHP lunch room, Ponch is eating health food instead of his usual "Peanut Butter Chocolate Smoothy" just because he wants to date one of the owners of the health food store. Soon we see him out running and doing silly agility exercises with the two women from the health food store.

Meanwhile, Tom is making a delivery when he comes upon a Glinco Industries truck that he tries to pass. When his steering gives out, he gets stuck on the side of the Glinco truck and causes a woman to drive off the road. Later, when Ponch jogs out by Tom's farm, Tom's partner, Cal, runs off suspiciously. On duty, Ponch encounters a kid who caused an accident when his sailboard crosses traffic. The kid throws a tantrum and Ponch helps him out by talking to his father. On the freeway, the women from the health food store are escorting Tom when a UPS type truck cuts them off and knocks Tom off the road. Cal was driving the truck. Tom is injured in the accident as are the women. One of the women is unconsious and threatened by acid leaking from a tanker truck. Ponch gets her out just before the broken valve on the tanker breaks.

At the end of the episode, Ponch and Jon try to show off at sailboarding but just make fools of themselves.