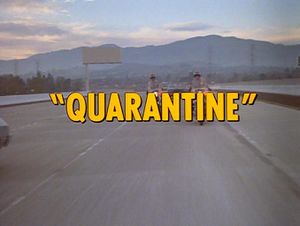 A small trucking company uses unsavory methods to put friends of Jon and Ponch out of their own trucking business.

The episode begins when Ponch and Jon make a routine stop on a non-English speaking citizen. Then, we are sent to a fourteen-year-old boy in a parking lot finding an unlocked car and enters it. Just then, two women head to the same car rushing their way to a play rehearsal. Both then ride along the Harbor Freeway when they discover that a boy "steaked with a 'bomb' " is sitting on the backseat of their car. After panicking and almost causing an accident, Ponch and Jon see what's up. The boy requests to go to Bakersfield. The two women tell the officers that he wants to go to Bakersfield and asks for directions. Instead, Ponch and Jon lead them to Central HQ.
At the same time, Grossie announces to Getraer that he's ready to leave. Getraer stops Grossie and tells him that he owes the department. Then Baricza arrives with two suspects caught siphoning gas from a moped. The two suspects are then held in custody by the officers.
Returning to the fourteen-year-old boy, he is taken to the headquarters where he encounters Sindy, Grossie, and Getraer. Jon enters the building, Ponch does not. The boy suddenly faints just when the doctor and the dispatchers arrive. Dr. Bosca, the doctor in attentand, examines the boy and claims that he is an illegal immigrant. He is also afraid that he is carrying some unknown disease. He then initiates a two-week quarantine until they discover the disease. When Grossie was asked to call the Bomb Squad, one of the suspects named Bill Conner (he refused to talk earlier) uses the phone and Grossie demands that he gets off.
Finally the boy is removed from the HQ and Grossie gets in contact with the Bomb Squad. Just then, Harlan enters the building and opens the "bomb" (Getraer ordered that the bomb is not touched). He opens the "bomb" and discovers some currency and a photograph. Grossie cancels the call and Getraer, in the process of blocking the entrance with a file cabinet with Jon, informs Harlan about the quarantine. Harlan replies that the sign was not posted eye-level, and that he had all his shots. Getraer tells him that it was too late and asks him how he knew that wasn't a bomb. Harlan suddenly drops it. Grossman, hearing Bill Conner talking to the other capive (Wiley, now the role of Conner's "client") that he councils on business and tax shelters, seeks tax advice from him (since Grossman was going to talk to his tax man anyway later that afternoon).
Back in Getraer's office, he just finishes a phone conversation with the doctor, who suggests that they should find out where he came from. Sindy tries to find clues from the photograph. Getraer lets them go with their plan. Both Sincy and Jon invistigate it in the break room.
Just then, Harlan tries to break open the wending machine because he didn't have any change. Wiley helps him "adjust" the machine. Getraer finds out what they're doing and requests that Wiley should "adjust" two items for him.
Jon then asks why they should stay in Central for two weeks. Grosie explains it them, and the leave not wanting to listen to him. In Getraer's office, they discover that Bill Conner belonged in the Westwood Veterans' Hospital in the psychiatric section, and that he runs around with many distinctive personalities, and that the hospital wants him back. Getraer tells Bill Conner that the VA hospital are worried about him and that they want him back. Conner assumes that it's trouble.
At the same time they're telling Conner this, Wiley gets a chance to disappear and escape. Getraer blames Grossie and they discover that he escaped through the vents. Sindy chases after him, and Jon tells Ponch to alert the others in the station about the break. Ponch agrees to check the roof.
Meanwhile, the food arrives,and Getraer encourages that Conner should councel with Wiley since he listened to Conner. Conner agrees.

Sindy captures Wiley, and they return to the break room where they're ready to eat. Conner councels with Wiley, and Wiley changes his attitude.

Back in Getraer's office, Sindy and Jon finally piece the puzzle together from the photograph with the words TRUCK, BAKERSFIELD, and FOOD. They come up with the Truckstop at Bakersfield. Sindy contacts the owners. The owners identify the boy as Lee, and explains that they are adopting him that he's visiting his grandfather in Seoul. Sindy tells him that Lee is in the hospital being diagnosed with a fever. The man drives up to the hospital.

For the next few hours, the officers and the captives pass the time with playing tic-tac-toe, sleeping, or yoga.

A few hours later, Getraer tells them that the boy was diagnosed with Manchurian fever and he was fine. He also said that it can only be contracted in three different places in the world (one was not too far north from Seoul), and that humans can't act as "vectors". That means they can leave, including Wiley (since the moped owners would not press charges against him).

As they leave, Getraer gives Jon and Ponch a day off. Both leave the building and meet up with the two ladies they met earlier in the episode. They introduce themselves as Lori and Crystal, and are concerned about the boy. Jon and Ponch promises to tell them the whole story during dinner. Lori and Crystal agree, and invited the officers to a play that the girls were in. The play was called "Panic in the Streets" concerning a typhiod epidemic. Then, the officers get a good laugh and the credits roll.