In the Best of Families

Jon and Ponch try to apprehend a family of thieves who make several attempts to steal a CHP cruiser as part of a bigger plot to commit an armored truck hit. Meanwhile, Getraer is uptight, and buckles down on Central as they prepare for a major inspection

After Ponch convinces Jon to move in with him while his apartment is being painted, they learn a CHP cruiser has been stolen. Baricza, Ponch, and Jon chase the kids in the cruiser who drive on the wrong side of a just-opened section of the Simi Valley Freeway. The kids stop in the center and try to run away while the cruiser gets rammed by typical "CHiPs" jumping-cars.

After the theme, Bonnie shows up and gets chewed out by Getraer for not watching her car for a minute while she was in Bruce's Coffee Shop. Meanwhile, the kids meet up with their mother who was planning an armored car rip off.

Back at Central, Grossie tells everyone that Captain R. J. Tinsdale has ordered a chapter 10 inspection.

That night, Jon shows up at Ponch's apartment and finds that the women neighbors are visiting.

The next day, Bonnie is really upset since everyone is making her life difficult.

Out on the streets, a West L.A. CHP cruiser is stolen. Ponch, Jon, and Turner pursue it. When Turner swerves to avoid oncoming traffic and pedestrians, he flies off a cliff and loses his wheels upon impact. The kids get away again. Jon learns that someone stole a two-tone Dodge Monaco ... a match for their cruisers.

At the dry cleaners, Getraer learns that his CHP uniform was stolen. While Getraer's out, Ponch spreads a rumor about Getraer getting promoted to Lieutenant.

That night, Ponch investigates tbe stolen Dodge Monaco and gets a street map that a thief left behind.

After lunch (at Lucy's Drive In), Baricza finds his cruiser doors and lights missing. That makes Ponch and Jon the only unaffected CHP so far.

In the locker room, Jon figures out that there's going to be a heist. Out on the streets, the fake CHP cruiser makes the armored truck take a detour. The mother cuts the armored car's radio antenna when they stop. The fake CHP make them stop later on and fill the truck with bees. When the guards run, the fake CHP takes the money. Ponch and Jon show up just in time and chase them. Bonnie and Getraer aren't far behind and help to block them in. They attempt to run down Getraer (who fell over), but Bonnie blocks them with her cruiser and gets rammed. 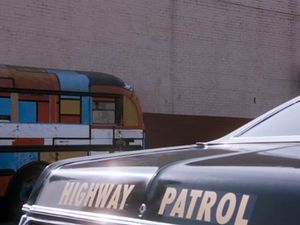