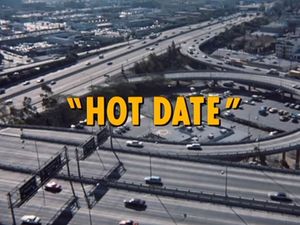 Everyone is preparing for an inspection when Ponch gets a postcard telling him his flight attendant friend is coming to town. He tries to swap shifts with Grossman, but at inspection it turns out that his license has expired. Ponch eventually swaps with Linahan, but when he gets home he finds a guy he and Bobby arrested is waiting for him. Someone is sending orchids to Linahan.

When Ponch and Nelson return from patrol, they find everyone preparing for the captain's inspection. Just before the briefing, Ponch gets a note that his flight attendant friend is returning. He manages to get the day off from Grossie (who is in the process of shining his boots.)

After the briefing, Ponch's cleaning lady meets a shady character in his apartment building. She refuses to let him inside. At the inspection, the captain makes Grossie walk to the captain to show him his license. The shine on Grossie's boots cracks...and his license is expired! Ponch gets the day off from Linahan after Grossie is stuck at the desk because of his expired license. When Ponch returns to his apartment the next day, two thugs (one is David Caruso) are waiting for him. They capture him. Meanwhile, Linahan and Nelson caught two hitch-hikers. Getraer questions them and they're not helpful.

Back at Ponch's pad, we learn that they're getting back at him because he and Bobby caught them breaking in to a warehouse. Later, Ponch's girlfriend shows up and they take her hostage. Ponch has her go get some cheese (and a knife) but one of the thugs sees the knife and stops her. They threaten to re-arrange her face unless Ponch calls for Bobby. Ponch calls and Grossie answers the phone and pages Bobby. Ponch invites Bobby over...and Bobby suspects something because he knows that yesterday Ponch wanted to be alone. While the hitch-hikers are questioned and the vehicle inspection continues, Ponch's cleaning lady shows up at his apartment.

When Bobby calls Ponch, Ponch tells him to have Grossie cover for him. (The thieves don't know that Grossie doesn't have a license!) Shortly, the CHP shows up to Ponch's apartment with a bang and save the day! After the hitch-hikers leave, Ponch's girlfriend gets a call (at CHP headquarters) and finds out that she has to work on the next flight.