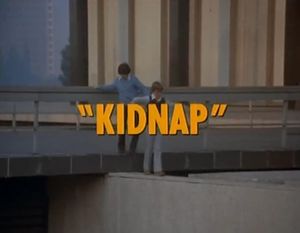 A couple of kids are supposed to be touring the courthouse after winning a traffic safety contest, but, after starting one of the CHP bikes they hide in the back of Rolls Royce. Two fleeing criminals jump into the Rolls and drive off, initially unaware that the kids are in the back. After briefly losing the Rolls, Ponch decides to follow undercover in a borrowed car, and leads his colleagues to the kidnappers with his "La Cucaracha" horn.

While Ponch, Jon, and a reporter are entertaining two essay winners at the courthouse, two criminals manage to escape. While the reporter puts a microphone on Ponch, the kids start his motor. Just before they're supposed to go into the courthouse, the kids check out a Rolls Royce. Pete and Ray hide in the Rolls.

Shortly, the two escaped criminals steal the Rolls and don't notice the kids until after they drive off. Ponch and Jon follow the Rolls at a safe distance.

At the courthouse, Getraer organizes his forces. The kids talk their kidnappers into stopping at a gas station. When they pull off the highway, Ponch and Jon start following another Rolls. They pull up close and realize it's the wrong one. As the Rolls drives out of the gas station, Bonnie shows up and follows them. Arriving at the gas station and talking to the attendant in Spanish, Ponch and Jon find a note with "405N" left behind by the kids. Ponch gets a bright idea to borrow a car for $40 from the gas station and use it to persue undercover. As some guys in a van drive by the limo, they realize there's a kidnapping going on. When they cause a scene, Jon pulls them over and tells them to stay out of the way.

When Getraer and Grossie catch up to Jon, they decide to try another rolling traffic block. The kidnappers play with the radio in the Rolls and find the police band. The Rolls speeds off and intentionally causes an accident. The kidnappers go to a residential alley and steal a station wagon. When Ponch finds the Rolls, he learns they stole a station wagon and signals to Jon with his "La Coucaracha" horn. The kidnappers drive into the car wash and Ponch is on their tail. Ponch continues to chase them and all the CHP officers center in on him just after he crashes into the station wagon and arrests both of the kidnappers. In the end, everyone has a good laugh as the kids honk Ponch's fancy horn.