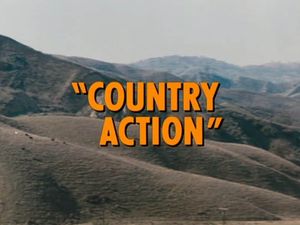 Ponch gets some help

After a pile-up where a stolen bull escapes, Ponch gets to take care of the driver's orangutan who can identify the cattle rustlers.

Ponch and Bobby respond to an accident and keep a bull occupied until animal control arrives. They find an orangutan that feels bad for its owner (who was knocked unconsious). When they visit the owner in the hospital to get information on the accident, he isn't helpful. It turns out that the cattle are stolen. The owner can't identify the men he was working for, but the orangutan can. Ponch takes her out for a ride on his motor.

That night, Ponch and Bobby go undercover at "The Palimino" with the orangutan. During the third country song, Ponch and Bobby end up in the middle of a bar fight. The music continues. The next day when Getraer finds out about it, he's upset with Ponch and Bobby. While they go to visit the victim of stolen cattle, they leave the orangutan with Harlan to clean cars. Ponch and Bobby find out that the cattle have anthrax. Later, Ponch and the monkey are out on patrol. (But THIS monkey isn't Bobby!)

That night, Ponch and Bobby return to the country bar "looking to sell some land". They meet a gentleman who tells them where to find the cattle rustlers that have the cattle with anthrax. When Ponch and Bobby show up, they chase the rustlers and arrest them after their truck rolls over. Back at Central, the orangutan shows up to say goodbye. Laughter ensues.