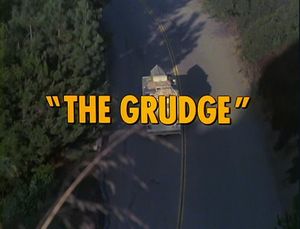 Driving home, some Alpha Alpha Omega fraternity brothers are headed towards a tunnel in their motor home. [Jon]] notices they're over the height limit and our heroes chase after them. The motor home scrapes some scaffolding and stops just at the entrance to the tunnel. Somehow, the motor home catches on fire. Jon saves a trapped frat brother while Ponch puts out the fire and finds quite a bit of pot.

Later, Ponch and Jon run across an abandoned VW Beetle in the middle of the road with a letter addressed to Ponch in it.

Later, Ponch gets more letters based on nursery rhymes. Everyone's confused by them.

After stopping by Central, Ponch and Jon return to the streets and find the convertible that dumped the cash. They chase it to Travel Town where the two frat brothers try to hide in trains. Ponch and Jon find them and go visit them and their other frat brothers when off duty.

The next morning, Getraer reads a commendation for Baker but gives a damage bill to Ponch.