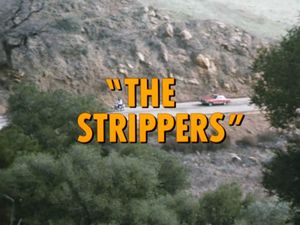 A Mercedes belonging to Jon's girlfriend gets stolen while they're skydiving. Jon and Ponch's subsequent investigation results in them crossing paths with a pair of narcotics officers who are investigating a drug smuggling operation in the same area.

The show opens with skydiving. Upon landing, they see Jon's girlfriend Diane's Mercedes 450SL being stolen. Ponch and Jon drive after them in Jon's truck but have to stop to help an overturned truck.

After starting to strip the Mercedes, the strippers see a drug drop. The plane which lands after the drop is then secretly inspected by narcotics enforcement. The next day, Diane's car is recovered...stripped. We also see another drug drop. The "narcs" rush to investigate but are stopped by the "wheelie-boppers". Meanwhile, the drugs are brought to the "Bar X Ranch" and the car strippers legally buy back the stripped car. That night, Diane sees her Mercedes at a restaurant...assembled.

After the drop is made, Ponch and Jon jump down to catch the drug dealers red handed. As a reward, Ponch and Jon get strawberry ice cream cones just outside of Brigid's Cafe.