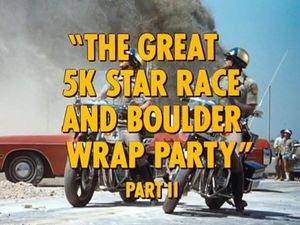 After being treated to scenes from Part 1, we find Ponch and Jon riding bikes on patrol near the boulder. (They look like they belong on Pacific Blue instead of "CHiPs".) While the thieves from Part 1 get comfortable in their new home, Ponch chases after Linda Rondstat and Robert Redford.

When a helicopter comes and tries to haul the boulder away, it can't lift it. Eventually, we get to see the fund-raiser where there are plenty of stars and Harlan does a constant play-by-play of the action.

Back at the boulder, Ponch and Jon get ready for blasting. Unfortunately, Jon's little friend picked a bad time to decide to climb on the boulder. He spray-paints "CHERYL" on the side. Jon runs up and gets him down.

After saving the boy, Jon spots the prototype motorcycle and they catch the thieves. Back at the fund-raiser, everyone's playing a variety of games including "DiP A CHiP".

Soon, the party is interrupted when everyone stops to watch the boulder blow up. After the dust clears, the boulder's STILL there. The head engineer says they'll have to build a retaining wall and take it apart piece by piece.

The show ends with shots of Getraer, Jon, Ponch, and Harlan being dunked.