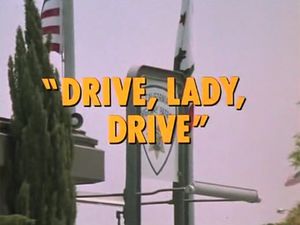 Ponch, Jon, Bear, and Lenny go to Palma Vista to cover for the striking Palma Vista Police Department. While there, they help an orphaned 10 year old girl find a new home, arrest a councilman's two sons and city manager's daughter on some serious traffic charges, and break up a hijacking ring. Ponch falls for a lady race car driver, but loses out in the end. 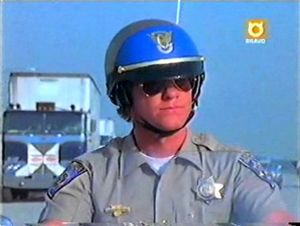 A blue Peterbilt 352 Pacemaker is behind Jon.

A man steals a truck and is pulled over by Ponch and Jon while his partner speeds by and wrecks cars. When Ponch and Jon chase him, Jon flips and crashes. Back at Central, Getraer assigns Ponch, Jon, Baricza, and Powell to assist other officers in Palma Vista. Meanwhile, a racer named Candi wins at the Phoenix Raceway and heads toward Riverside. They find a house on fire and stop to assist.

Candi and Donna arrive at the Palm Vista Police Department. 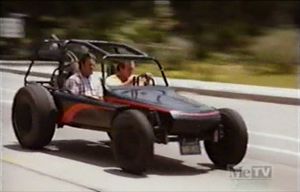 Meanwhile, Ponch, Jon, Baricza, and Powell arrive in Palma Vista to replace some striking police officers. Baker heads the "A Watch" from 6:30am to 2pm. When Candi arrives in Palma Vista, she brings a girl to the police station where Ponch and Jon try to help. When Ponch and Jon say they can't watch after the girl and she'd be left in the police station, Candi takes her to the race track. Later, Candi's parents are in town to watch after the girl.

Candi in the pits getting ready to race number 43 at the Riverside Raceway. 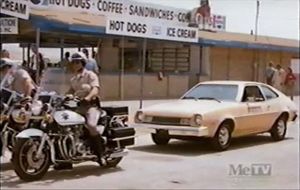 Ponch and Jon escort Miss Rudd to the Riverside Raceway.

The next day, some guys in a dune buggy speed by the police station. Ponch and Jon chase them but can't find them when they hide under a loading dock. They didn't lose out though...Jon spotted the truck that they pulled over at the beginning of the show parked on the side of the road. Later, Candi's practicing racing as the girl watches. Ponch and Jon arrive with a woman who may know who the girl is and where she belongs. When the girl spots the woman, she runs onto the track. Candi swerves to avoid hitting her. Then...just at the last second, we see "To Be Continued"!