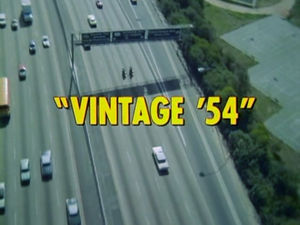 She's the vintage owner of a vintage car. Eighty-five-year-old Mrs. Downey reports her auto is stolen.

Jon and Ponch are commenting on how everyone seems to be headed out of town for the long weekend. Ponch says he'll sleep on his day off, but Jon thinks maybe he'll go out of town for a day.

Down the road, a family meets at a rest stop on the way to "the lake" with their kids and their kids friends. It's a very confusing situation. In the process of swapping cars and making proper arrangements, they leave their baby behind on a picnic table.

After the theme, Ponch and Jon chase a speeding '58 Corvette. While the car is stopped, some car thieves circle around to see where he goes after he's turned loose. When the Corvette parks at a rest stop, the thieves steal it.

Soon after that, a trucker finds the baby and has a CB radio buddy tell Ponch and Jon. They arrive to find the baby right where the family left it.

At Central, Getraer finds Officer Webb with the baby and Officer Gilbert from County Juvenile. When the baby cries at Getraer, he claims he's better with older kids. It's likely the baby will end up in a foster home and Ponch recommends a neighbor of his who has already agreed to take "Princess" into her home.

On patrol, Jon spots a skydiver who has parachute trouble. They realize the he's headed for the freeway and find him hanging from a road sign on an overpass on I-10 at the East LA interchange. With the help of two citizens, Jon holds onto the skydiver from above while Ponch gets assistance from a crane truck below. He has the crane lift him into place just in time to catch the skydiver.

That night, Ponch and Jon both show up separately with gifts for the baby. They babysit while the foster mother goes out to get some things. Unfortunately, they don't do a very good job.

Meanwhile, Mrs. Downey goes to the store to get more booze and her car is stolen by the vintage car thieves.

The next day, Ponch and Jon spot "Martians" driving an unusual car without plates or taillights. They follow it to a garage and learn that the drivers are models and the car is supposed to be in a photo shoot.

At the morning briefing, Getraer updates everyone on the missing vintage automobiles. After the briefing, Mrs. Downey is at the front desk looking for her '56 Cadillac. In her typical fashion, she gives Getraer orders.

On patrol, Mary 3 and 4 get a call to check on a reported abandoned 1965 Avanti. They arrive to find a dumpster that gets loose and rolls downhill. It refuses to pull over for them and eventually hits a station wagon.

At Central, Getraer gets abused by the family missing the baby as well as the 85-year-old Mrs. Downey. Getraer awards Baricza with the assignment of giving Mrs. Downey a ride home.

Back at the Avanti, Jon learns a possible license number from the lady that called in about the car and saw a couple guys try to start it.

Soon the baby is returned to its family. Although Jon and Ponch are sad to see Princess go, they're glad she's with her family again.

Meanwhile, a CHP officer, 15-80, finds a truck matching the description that Jon had reported near the Avanti. Mrs. Downey has Baricza going in circles. When the call comes in for her car, Baricza drops her off and responds with Ponch and Jon in the lead. The CHP arrives at the car thieves' hideout and busts them all without much of a chase.

Mrs. Downey arrives at the thieves' warehouse and takes her car. On her way out, she backs over Sarge's motorcycle.

"You stick with me and I'll have you in diamonds!"
-Ponch (to the baby)