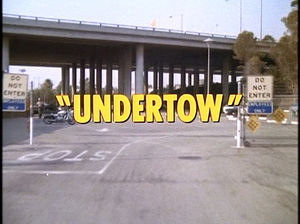 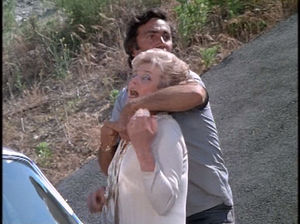 This creep preys on women

While Jon and Ponch talk about basketball, a report comes in over the radio about a disabled Mercedes on the Golden State Freeway (at call box 402). A tow truck driver who was listening to the police band beats them there and robs the driver. Jon stops to talk to the woman while Ponch chases the tow truck. The truck causes an accident with a truck carrying compressed gas canisters. Ponch stops for the accident and has to give up the chase. While checking on the driver of the "Katleman's Khemical's" truck, he inhales an unknown gas. The driver doesn't know what the gas is, but says that it's not explosive because everyone who was loading the truck was smoking. After Ponch gets him to safety, Brouillette and Jon arrive. Ponch and Jon head out and leave Fritz and Brouillette to handle the cleanup. Fritz spots a nitrous oxide label on one of the canisters and tells Brouillette "that stuff will really flip you out!" 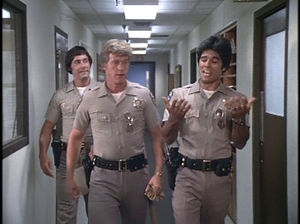 Upon returning to Central, Ponch begins acting loopy and drinks from a hose. (The viewers also learn he's seeing double.) Walking in, Officer Barkley asks Ponch if he "still got those hot hands?" Ponch claims they're always hot and that he'll "make many points. Many." He goofs around a bit, acts buddy-buddy with Getraer, and makes a personal phone call to a woman named Camile while Jon works on writing up a report. 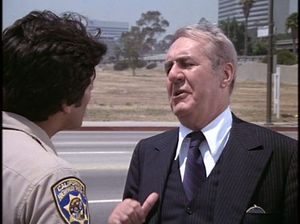 Out on the highway, Jon spots an erratic driver and Ponch finally gets him to pull over. The driver, played by Jim Bakus, is clearly intoxicated. Ponch tries to give him a sobriety test but can't do it himself. After giving directions to a woman, Jon realizes that Ponch is acting weird because he inhaled the gas at the accident. Just as Jon is about to get Ponch into a patrol car, Ponch hears a dispatch on the a disabled vehicle, he speeds off with Jon chasing him. After nearly rear-ending another disabled vehicle, Jon pulls over Ponch (in a classic "CHiPs" moment) and tells him, "The party's over, Hot Dog." Meanwhile, the tow truck shows up at the location of the disabled vehicle that was announced by dispatch. 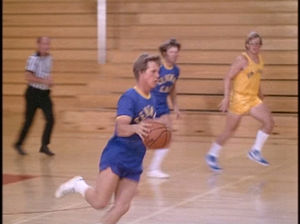 Jon hustles down the court 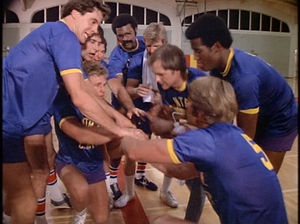 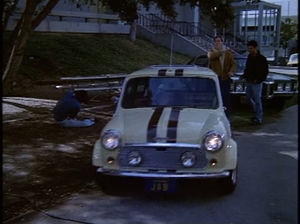 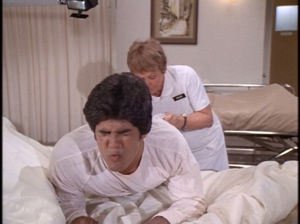 Ponch takes it in the rump

Later, on the basketball court, the "CHiPs" team loses without Ponch. After the game, Jon goes out to his little car and finds people sitting on it. When he is confronted, he kicks one of the guys in the knee. While Jon visits Ponch, in his first of many hospital stays of the series, Jon informs Ponch that they lost by 40 points and his girlfriend didn't show up to the game. Soon, a mean nurse takes his Ding Dong and gives him a shot in his rear end. He decides to stay for the sponge bath from the sexy nurse.

The next day, while discussing "sunshine, lollipops, and rainbows," a bird craps on Ponch's windshield. Stopping at a gas station to clean it off, they realize it's being robbed. While Ponch unties the gas station attendant, Jon chases the robber who ends up crashing his roofless, windowless, and doorless truck into a tree flinging him forward onto the ground. Jon gives him medical attention and psychiatric counseling.

Ponch shows up to the briefing with a doctor's note. Getraer asks the officers to respond as quick as they can to any call about a disabled female, but then stay back and see what turns up. He also informs everyone that they have been given a rematch for their basketball game. 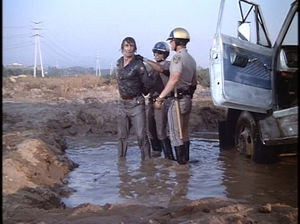 The bad guy is finally captured

After the briefing, Jon gives a speeding ticket to an old surfer and his bird. While being entertained by a bird, Jon notices a tow truck "assisting" a woman. Ponch and Jon head over to check it out. When the tow truck driver spots the police motorcycles, he takes off and is chased north on the Golden State Freeway (approaching the Ventura interchange). The car in tow breaks loose and flips over. Ponch apprehends the driver when he runs into a dead end. (Ponch mentions his sister for the first time here.) 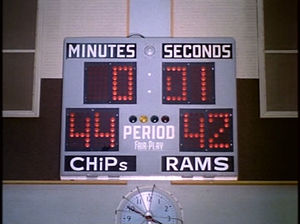 During the "CHiPs" vs. "RAMS" basketball game, the "CHiPs" are down 6 points with 55 seconds left. Ponch manages to score the winning shot in the final second.

"Sunshine, lollipops, and rainbows. I mean, everything that happens to me today is gonna be right on!" 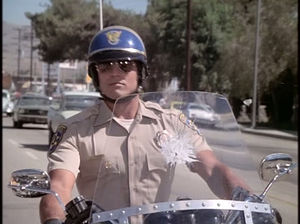 The wrapper is visible on the right