Difference between revisions of "The Volunteers" 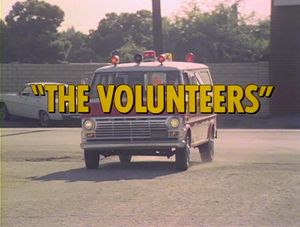 Jon arrives to meet up with Ponch before they head to work. Jon is surprised that Ponch is already there. Ponch informs Jon that he is working on his punctuality, however, we see that his early arrival is driven by a jogging stewardess that he has a date with that evening. Over the radio we hear that a robbery suspect is being chased. Ponch and Jon join in the chase along with Officer Jane Turner. The car being chased, a stolen yellow T-Bird, crashes and bursts into flames at the Newhall Chemical Depot. Fearing that their tanker trucks might explode, drivers scurry to move their trucks filled with hazardous chlorine gas, away from the burning car, which then explodes.

Getraer arrives and informs the officers on the scene that an escort is needed for these trucks. Getraer asks for volunteers but then assigns Ponch, Jon, and Turner to escort detail. Jon asks why the trucks are not safe where they are, and he is told that they are filled with chlorine gas and heat could set them off. The owner of the trucking company, Charley Davis, is informed that the trucks need to be moved to Owens Valley Depot. Charley is upset that they will have to drive their loads 140 miles in the heat of the day. Ponch runs into Charley's daughter, Robbie, and they have an exchange of words because she thinks that Ponch is being sexist toward her.

The convoy treks toward the Owens Valley Depot. Baricza has gone ahead of the convoy to control traffic. The convoy encounters a pick-up truck with three men, one of whom is shooting signs on the side of the road while they drive. After the pick-up passes the convoy, it causes a multi-car accident that blocks the road. The officers rescue those injured in the accident. A truck transporting caged tigers overturns and a tiger gets loose. The tiger enters a local market and corners the owner's wife. Ponch and Jon coax the tiger into a store room by tossing raw meat toward the tiger. The ungrateful owner expresses his displeasure that Ponch and Jon used an expensive cut of meat to coax the tiger.

Ponch and Jon return to the scene of the accident and Charley insists that they get back on the road. The convoy begins their trek again via an alternate route. As they arrive in the town of Plackerville, they are met with a roadblock. The police chief and the city councilman inform Ponch and Jon that they are not going to allow trucks filled with poison through their town. Ponch and Jon plead with them to allow them through; the councilman gives in and the convoy continues on.

The convoy next encounters road hazards including dirt and rocks that force them to stop. While stopped, a rock falls and damages a valve on Robbie's truck causing chlorine gas to leak. She tries to close the valve but is overcome by the gas; she needs oxygen or she will suffocate. Some hikers arrive and mention that they have oxygen back at their campground. Ponch rides over rough terrain and returns with the oxygen and a flat tire. Turner takes Robbie ahead to meet a helicopter transport that has been radioed for. The convoy needs a driver for her truck; Jon volunteers to drive.

While driving the truck, Jon's trailer comes loose after he drives over a rock. Ponch, who is riding Jon's motorcycle, pulls over and boards the truck while it is still moving. In daring fashion, Ponch re-engages the safety after Charley successfully bumps the trailer back into the fifth wheel with his truck. The convoy arrives successfully, however, Ponch and Jon are without their motorcycles. Jon approaches an attractive woman in a Cadillac and successfully negotiates a ride for Ponch back to Jon's motorcycle. 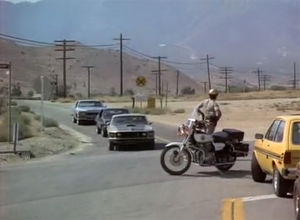