Difference between revisions of "Rainy Day" 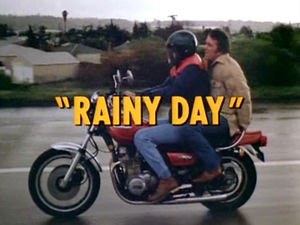 Nothing can stop them from their appointed rounds. During a deluge, the motorcycle duo patrols in a car.

Ponch thinks it's going to be a nice day, but Jon feels raindrops. As it starts to rain, a motor home is driving along in front of them with a casino hidden inside.

Down the road, a couple guys on a motorcycle convince a woman to pull over by saying there's something wrong with her wheel. When one of them walks her to the other side of her car, the other guy hops in and steals the car. Claiming he's a hitchhiker, the first guy hops on his motorcycle and "chases" him, leaving the woman all alone.

While Ponch and Jon wait under a bridge on the Hollywood Freeway for the rain to stop, they witness an accident involving a school bus and a car. A car involved in the accident catches on fire. Ponch gets the bus driver out while Jon puts out the fire and everything turns out okay. To win her affection, Ponch offers to take the bus driver's kids in a tour of Central sometime.

At the briefing, Getraer goes over the latest car thieves on the motorcycles. As the briefing ends, he reminds Baker and Poncherello that car 18 is brand new.

In the car, Ponch tells Jon that he read the manual and names what various buttons do. He presses the trunk release button and has to get out in the rain to close it while Getraer watches in disbelief.

On the highway, a man by the name of Sanders accuses the rolling casino operators of cheating him. The casino operators rough him up and leave him on the side of the road. Ponch spots the man on the side of the road. After dropping him off at Valley General Hospital, the partners go to talk to the man's wife. From the conversation with her, they realize he's a compulsive gambler.

Out in the rain again, they notice a man who had an umbrella open out his window. Jon inspects his car and finds a lot of guns hidden all over the place. He also admits to having a "shower gun" because of Psycho. After impounding $1000 worth of weapons (except the "shower gun"), Ponch and Jon spot the car thieves in action and chase after them. They end up in the LA River. After the thief on the motorcycle is cornered by Baricza and Grossman, he slips and our favorite officers nab the guy.

Back at Central, the school bus driver shows up with a bus load of kids. Since their trip to the zoo was canceled, she brought them for a tour of Central instead and Getraer ordered Ponch to give them the full tour. In the other room, Getraer is conducting the afternoon briefing. He updates everyone on the "creeper gang" that is holding gambling operations somewhere in the vicinity. Then Ponch brings the kids through on his tour and explains what goes on at briefings.

Meanwhile, we see Mr. Sanders grab a rifle at his home. His wife sees him and he swears that he's going to get his money back.

When Ponch's field trip tour is over, Ponch gets a date for pizza and Jon gets a call from the gambler's wife. Ponch and Jon head out to find the guy.

They spot him north bound on a closed section of the Glendale Freeway chasing after the rolling casino. Ponch uses the police cruiser's bullhorn to instruct the casino motor home to stop but Mr. Sanders refuses, rams the cruiser, and ends up rolling over. With the help of Baricza and his shotgun, everyone is arrested.

When Ponch and Jon return to Central, the cruiser is all washed and shiny..."except for one minor detail." They debate over who should tell Getraer that there's now a dent in his nice, new cruiser. Just as they're about to tell him, Grossie backs into the dent.

"Anything you need?"
"Yeah. Bus."
-Ponch and Baricza after Baricza has an RV full of people to arrest