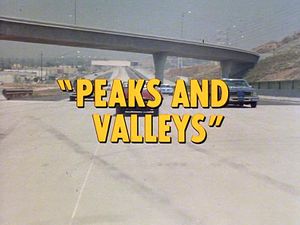 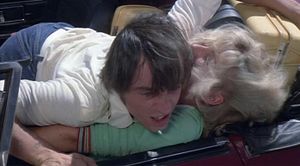 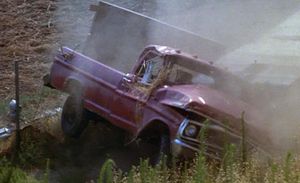 When they return to Central, they arrive to a spotless garage. They meet Dave the dog and his owner Harlan (the new mechanic). Grossie tells them that the dog was on dope patrol at the border. Ponch and Jon discuss the camper accident with Getraer, who informs them that there has been a complaint lodged against them. 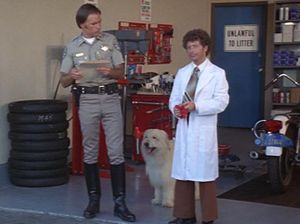 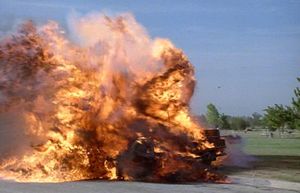 Ponch and Jon save the driver.

At the hospital, the spinal victim recalls that the resucers were wearing helmets, brown uniforms, and boots. The victim identifies Ponch and Jon as the men that pulled him from the camper. The victim expresses concern for the officers, but the lawyer informs him that they should not care about the fate of the officers. Ponch and Jon discuss their predicament as a woman in a classic car drives past them.

Later, Ponch and Jon chase a truck with a trailer fire. They pull the driver out of the vehicle just before the truck explodes. The paramedics arrive and tend to the the driver as the fire department puts out the fire. Getraer arrives to inform them there will be a hearing regarding the camper accident and that they should be concerned about a potential civil action against them.

While off duty, they visit the used car lot and consider working there. Stan Bosca pitches the benefits of the job and tries to make Jon feel guilty because he cannot "help a friend out" by burying the ticket he wrote. 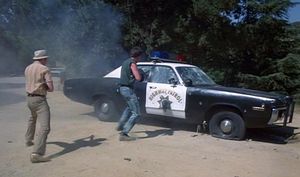 While Jon gives a ticket, Ponch and Baricza respond to an anonymous call of dirt bikes near the reservoir. When Baricza leaves his cruiser to investigate, two guys shoot up his cruiser. Ponch calls in "shots fired" and Jon responds. As the guys walk away, Baricza draws his weapon on them. Ponch and Baricza are arresting them when Jon arrives. 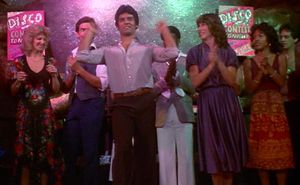 Ponch on the dance floor.

Later, Ponch introduces Jon to a woman, the one they have seen driving classic cars around the city, who asks him to a disco. Then they visit the spinal victim, Bob Niles, in the hospital. He remembers that it wasn't Ponch and Jon that moved him...but power line guys!

That night, Ponch and Jon show off their disco techniques with the ladies. When they take a break from the dance floor, a pregnant woman is about to give birth. Ponch takes control while Jon assists. In the world's easiest delivery, she gives birth to a boy. Ponch and Jon enjoy the applause when the DJ announces that they're CHP officers.