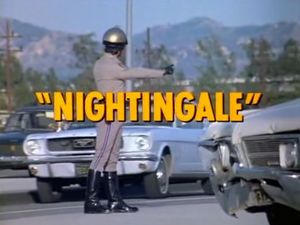 Various CHP officers encounter a mysterious female doctor who treats accident victims, and then disappears before anyone gets her details. A teenage couple try to run away to Canada, but their van breaks down on the freeway.

While patrolling the freeway, Ponch is trying to convince Jon to get tickets to the UCLA basketball game until they stop to help a lady whose car broke down. The wrecker who stopped to tow her is refusing to do so because the lady had no cash with her. Jon works out a compromise, but is dismayed at people's lack of compassion for others. Later, a man gets distracted at the wheel and wrecks on the shoulder, resulting in a crushed windpipe. A mysterious woman arrives to help, and asks Jon to assist in an emergency tracheotomy.

After she successfully opens the victim's airway, she immediately leaves. The next day at lunch, Getraer talks to Jon and Ponch about the mysterious lady, and things don't add up about who she is and where she practices surgery. Ponch reminds Jon about the UCLA tickets, and lets him know he found him a date. Across town in the suburbs, a teenage couple, Jeff and Kim, is in love, and they plan to run away together. Kim's sister comes home and figures that things aren't as they seem as Kim and Jeff are leaving.

At Central, Getraer tells Jon and Ponch that their mysterious street doctor gave a false name in a previous incident, and that she doesn't work at any nearby hospitals. This discourages Jon, who was finally beginning to restore his faith in people caring for others. Ponch takes a moment to hound Jon about the basketball tickets. Back in the suburbs, Kim's father returns from work, where her sister gives him a runaway note. The teen couple is on their way to Canada until Jeff's old Volkswagen Minibus breaks down. Ponch and Jon arrive to help, and have the kids taken to Central…..before Ponch mentions the UCLA tickets again.

Later,Turner is patrolling when he's stopped by a man saying that his Roadster was stolen. He puts out the call, and Jon and Ponch spots it from an overpass. As they give chase, the Roadster causes an accident with a man on a bicycle. Ponch stops to help, while Jon continues on. The mysterious lady happens to be nearby, and comes to help the victim. Ponch tries to get her name, but she ignores him and begins working on the victim. Meanwhile, Jon chases the Roadster to a nearby landfill and apprehends the thief.

Back at the accident scene, the lady manages to escape again. Out at the county courthouse, Ponch runs into Jeff, who's just left the marriage license office. Jeff is set on marrying Kim and running away. Ponch tries to reason with him before he leaves. At a pavilion, Jon stands in line for the UCLA tickets, but the line soon closes due to a sellout. However, Jon does get a girl's phone number.

At Central, Jon gives Ponch the disappointing news about the tickets, then Bonnie walks in with the real name of the mysterious lady they've been trying to find out about – Lucy Kenton. They go to Getraer to get his blessing to follow up. Meanwhile, Jeff goes to see Kim, but her father won't allow it.

Across town, Jon and Ponch find Lucy's residence. They find that she's neither a doctor nor a nurse, but her home is setup to be a clinic for resident aliens who cannot afford medical care. After talking with Lucy, they leave with no ideas on what to do about her situation. Days later, Getraer finds that his top two motor officers are in a funk over the ordeal, and offers advice about the MedEx program, a program that allows qualified individuals to be certified as assistant doctors. Refreshed by the idea, Jon and Ponch hit the streets.

Jeff has just gotten a new job as a painter, but instead of going to his first assignment, he uses the car to pickup Kim and run away. Kim's dad sees, and chases them. On the freeway, a bale of hay tumbles off a pickup onto the roadway and causes an accident with a lumber truck and Jeff's car, trapping them inside. The truck catches fire as Kim's dad arrives, and he's unable to rescue them. Listening to a police scanner, Lucy hears the location of the accident and heads in that direction. Motorists are able to help the truck driver out of the cab. Ponch and Jon arrive and get Jeff and Kim out of the car after smashing out the window. They clear just before it all explodes.

When they look over their shoulders, they see Lucy, now a certified doctor's assistant, giving aid to the truck driver. This gives them the satisfaction they'd been seeking. At Central, Ponch presents tickets to the UCLA game to Jon, telling him that they came from Jon's date's brother, who plays college ball in Phoenix. The episode ends with freeze frames of laughter, when Ponch tells Jon that his date is much taller than he is. 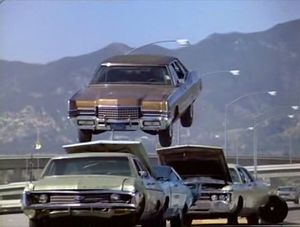 The green Chevy from Kidnap. 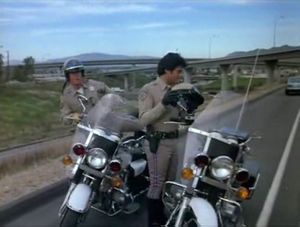