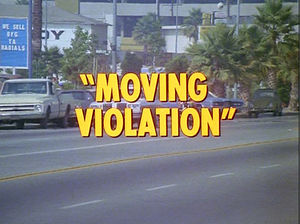 Our heroes rescue a man from an overturned van filled with snakes. Plus: Ponch goes to traffic school. 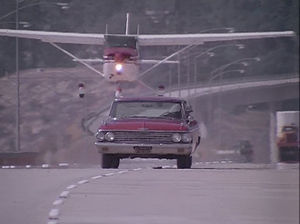 A Cessna lands on the highway

As Ponch talks about career alternative, he spots a plane in trouble. It has to make an emergency landing on the freeway. Ponch and Jon hold back traffic. The plane lands just before a bridge and the female pilot mistakes Ponch for a Sergeant. Ponch plays it up and gets a date with the pilot.

After a call comes in for a bus stolen from the First Baptist Church, Jon spots it around the next corner. In order to get in good with Getraer, Jon lets Ponch take credit for finding the bus. At Central, Getraer gets distracted and selects the wrong snack. Since he's so pleased with Ponch, he gives him the Ding Dongs.

Ponch gets a ticket

That night, Ponch is driving his date to dinner in his motor home and she realizes he's just an officer. He gets distracted by her and changes lanes without signaling. He gets pulled over and takes the ticket. He doesn't flash his badge to get out of it either. 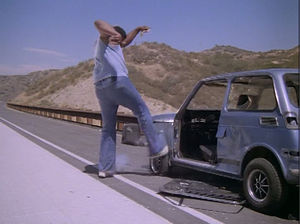 Later, Jon and Ponch pull over a guy in a tiny car for speeding on the Pomona Freeway. He gets upset and starts ripping apart his car by hand.

During lunch at Lucy's Drive In, Ponch finally gets Jon to listen to his problem. Jon suggests he go to driving school so that the ticket doesn't go on his record and Getraer doesn't find out. Getraer calls Jon at the drive in and asks him to do an accident call. 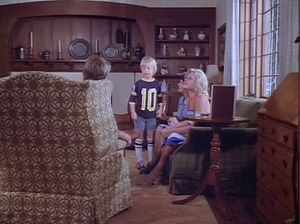 One of the most touching scenes of the entire series

On the accident call, Jon and a neighbor visit a woman at her house. They sit down in her living room and Jon breaks the news that her husband was in a traffic accident in Bakersfield. He died on the way to the hospital. The woman's son sees the back of Jon's head and runs in yelling, "Daddy, Daddy!" 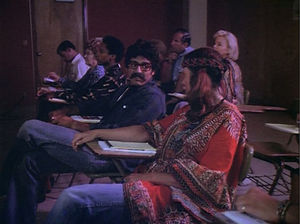 Ponch is in disguise

After one of the most touching scenes of the whole series, we see Ponch going to traffic school in disguise to get out of the ticket. He ends up sitting next to a hippie girl who rode a horse on the freeway. 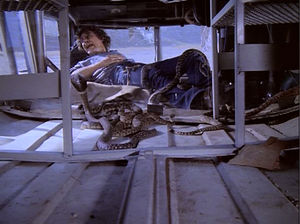 Watch out for snakes!

The next day, Ponch and Jon chase after a blue University of California van that clipped the door off of a fat guy's station wagon. After a thrilling chase, the van flips over and the guy screams for help...because the van is filled with snakes! Baricza and Fritz show up and break the windshield while Ponch and Jon freeze the snakes with the CO2 fire extinguishers.

During the briefing, Barkley brings the reverend into the briefing room to report his bus stolen again. Getraer asks Hunter to "put it on the air." 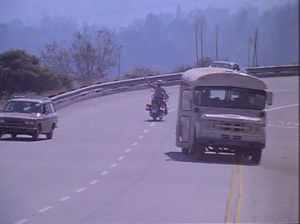 Everyone heads out and it's not long before Fritz spots the stolen bus driving slowly eastbound on the Angeles Crest Highway near Foothill Drive. Fritz lets Ponch take credit and the three of them manage to pull it over. They make everyone get off the bus. As the old guy explains why they stole the bus, it starts rolling with an elderly couple still on board. Ponch jumps on and tries to stop it but can't. He backs it down the hill while Jon clears the way. When he gets to a runaway vehicle median strip, he uses it to stop the bus. 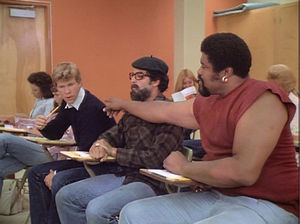 Jon joins Ponch in traffic school for no particular reason

In the final scene, Ponch (in disguise) drags Jon (not in disguise) to traffic school. After a minute, the guy who pulled apart his car walks in. He recognizes Ponch and Jon walks out.

"Are you crazy? That guy could wipe out the entire front line of the Dallas Cowboys! We need all the backup we can get!"
- Ponch 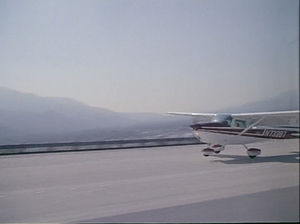 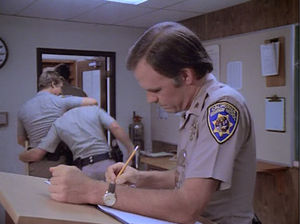 In the background, Jon seems out of character