Producers used the same trailer for filming in season 3 as they did in the first two seasons. The bikes on the trailer were still KZ-900. Because the difference would be visible, they removed the KZ900-C2 windscreen and put a KZ1000-C1 windscreen on the bikes but they forgot to replace the pursuit lights (they are bigger on the KZ900) and the metal frame below the headlight (missing on the KZ900-C2). 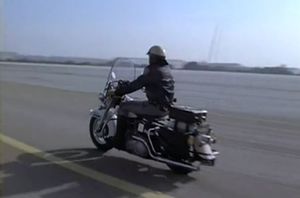