With Ponch in the hospital, Getraer fills in as Jon's partner for the day. While patrolling the L.A. streets, they decide to respond to a call heard on the radio about a fire at a nearby bank. Unaware that the group of firemen are imposters that are actually robbing the bank inside, Jon makes clearance for the fire truck to leave the scene at their request.

After the theme, Jon and Getraer are visiting Ponch in the hospital. Ponch taunts them, saying he would've had the whole thing figured out and discovered the scheme before the phony firemen got away. Getraer gets testy and suggests that he and Jon get back on patrol. Meanwhile back at Central before briefing, Jon's checking his mailbox, which turns out to be booby trapped, Grossie laughing in amusement. It turns out that Bill Clayton, a former partner of Jon's (and an annoying prankster), is lurking -- he'd been augmented in the absence of Ponch. At the briefing, the shift is told that they are on restricted time off, due to a senator's visit.

Back on the streets, an alarm sounds in a jewelry store, where the phonies are at it again, this time disguised as building engineers. They escape through the roof of the building, then leave in a cherry picker as standers-by look on.

Back at Jon's apartment, he finds his furnishings are being removed. Then Bill Clayton emerges from the bushes with a camera to take a snapshot of Jon's reaction to the ruse. Irritated, Jon agrees to let Bill stay with him for the few days he's in town to help out at Central. Later, following a briefing back at Central, Bill stands by after booby-trapping Grossie's motorcycle seat. After a good laugh, he and Jon go visit Ponch in the hospital.

Jon gives Ponch a little payback for teasing them about letting the phonies get away, by acting like he enjoys having Bill as a partner. Moments later, a nurse comes in and asks them to leave, so she can "service" Ponch. Ponch questions what happened to his original nurse, as she was nice and more attractive. The nurse sternly demands that Ponch turn over, any following events are left to the viewers' imagination. Out in the canyon area, two of the phonies, the lead man named Bright, are out "testing" an ambulance. Bright begins to drive erractically with lights blazing. Meanwhile, approaching from the opposite direction are three teenagers out for a drive, the driver is speeding. They zip by Jon and Bill, and they pursue.

The girl's pleading for the driver to slow down fall on deaf ears, as the boy is afraid of losing his license. They round a curve, nearly colliding with Bright and the ambulance. They swurve to avoid the collision, flip over on a dune, then teeter on the edge of a cliff. Jon and Bill stop; Bill tries to weigh down the back end of the car while Jon radios Baricza for assistance.

Jon comes over to help as Bill begins to complain about his back and not being able to hold the car much longer. Baricza shows up and they devise an impromptu plan to hold up the car by tying seatbelts around his and the other car's bumpers. As they remove the teenagers, the seatbelt begins to rip. They get the kids out just in time as the seatbelt gives way, and the car tumbles to the bottom of the cliff. Back in downtown L.A. the ambulance speeds past Grossie, and he follows. The ambulance pulls over, turning off the lights, and Grossie pulls alongside and offers an escort. In an on-the-spot lie, Bright says that it's no use; the (non-existent) patient in the back had died. Ponch is now out of the hospital, and the senator arrives into town at a hotel containing the city's largest jewelry stash. Jon and Bill are at the city's vehicle depot putting the pieces together, discovering that Bright has been taking a lot of vehicles on test drives lately; that particular morning, a police car. They continue to hang out at the depot, while at the hotel, the phonies, dressed as cops, make their move. They escape with the jewelry.

Back at the depot, a call comes in on Jon's motor to call Ponch at home. Ponch tells him about his hunch that the phonies might make a hit on the jewelry store, using the senator's visit as cover. Ponch hears a call come in on his CB scanner. He holds it up to the phone so Jon can hear, as it describes the men they've been after. Jon commends his partner for his instincts, then gets set to apprehend them. Out in the yard, Jon tells the head mechanic to close all but the main front gates. Bill snubs Jon for believing the simple logic that Bright will return to the depot like he did all the other times, resulting in his capture. Just then, Bright enters the yard in the police car. Bill gives chase as Jon hops aboard a fire truck to block Bright in. Soon after Jon goes to help Bill, Getraer enters the yard. He follows Bill, while Jon goes to another part of the yard and nudges a gate closed with his motor to distract Bright. He crashes into a pole and takes off again.

The pursuit treks all over the yard and finally ends in a foot pursuit. As John apprehends Bright, he inadvertedly releases an oil lever on one of the vehicles as Bill approaches to assist. He gets covered in oil. In disgust, Bill yells at Jon, thinking he deliberately spilled the oil, as Jon taunts him, then helps him up.

Back at Central, Getraer and Harlan present a bill to.....Bill. It shows supposed charges to rigging Jon's mailbox, Grossie's motorcycle seat, and cleaning up the oil spill. Just as Bill is about to lose it, the group hits him with "GOTCHA!" Bill leaves, wearing humble pie, yet laughing at himself. The episode ends with Ponch walking in, and freeze frames of everyone welcoming him back to duty. 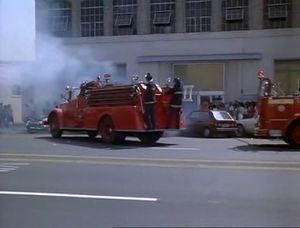 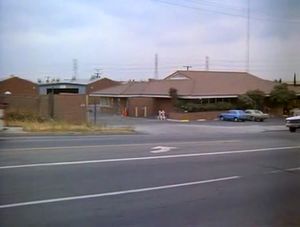